The Telegraph also reports on the Muslim Action Forum protest – calling it “huge” in the headline but saying it was about a thousand people in the first sentence. A thousand people is a huge protest? In London?

At least 1,000 Muslim protesters gathered outside the gates of Downing Street to protest against the depictions of the Prophet Mohammed in Charlie Hebdo, the French satirical magazine.

The protestors, many of whom were divided into groups of men and women, gathered just yards from the Cenotaph which remembers Britain’s war dead, and blocked half of Whitehall as they demonstated.

It comes weeks after two terrorists attacked the offices of Charlie Hebdo, the Paris-based satirical magazine which had published images of the Prophet Muhammad, killing 12 staff and wounding 11 others.

Three and a half weeks, to be exact. Three weeks after the genuinely huge protest against the murders and for free speech in Paris. Today’s protest is against Charlie Hebdo and for murder.

The meeting was organised by the Muslim Action Forum, which was handing out leaflets about the demonstration on Whitehall.

The leaflet said: “The recent re-publishing of the cartoons, caricatures and depictions of the Prophet Muhammad (peace be upon him) by Charlie Hebdo magazine and other publishers is a stark reminder that freedom of speech if regularly utilised to insult personalities that others consider sacred.

Oops. Somebody should have proofread that leaflet. Final clause missing. Maybe it was too difficult to think of the right final clause? Let’s see…”a stark reminder that freedom of speech if regularly utilised to insult personalities that others consider sacred…should be punished with mass murder”? Tricky, isn’t it. No wonder it’s missing.

Such actions are deliberating insulting and provoking to Muslims worldwide as British citizens, we believe that these publications will continue to ‘sow the seeds of hatred’ and damage community relations. 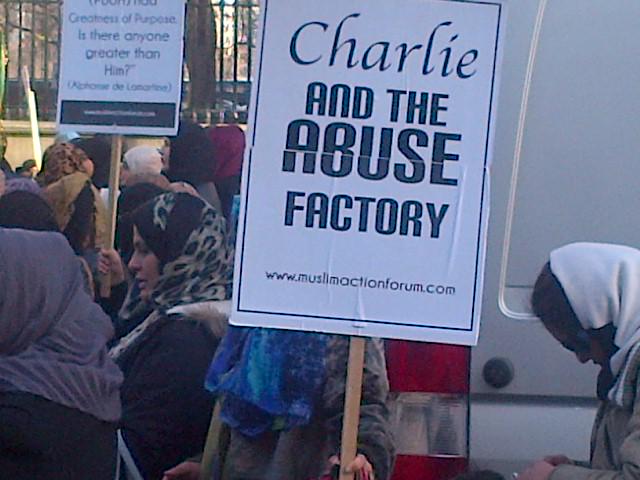 The abuse factory. That’s why the Kouachi brothers murdered them, is it? 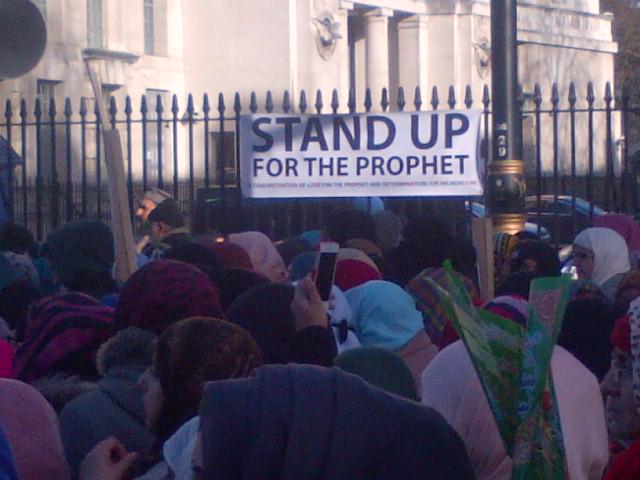 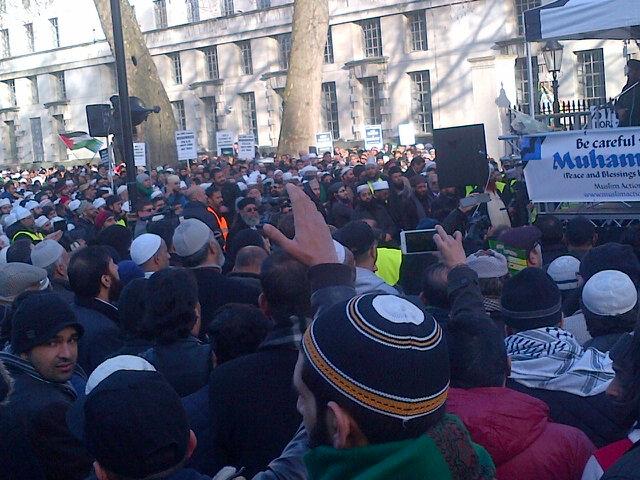 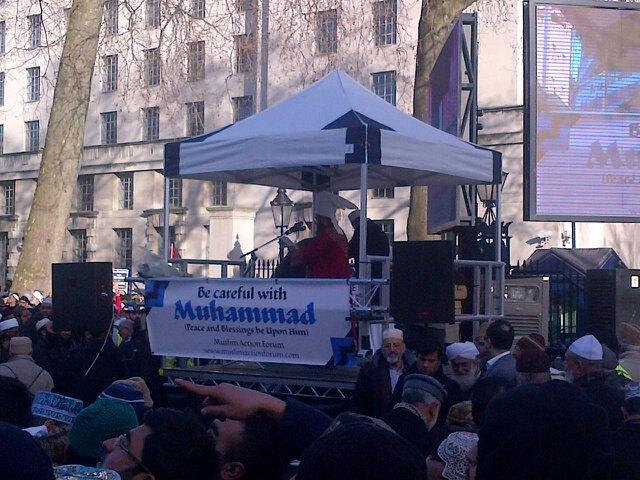 “Be careful with Muhammad.” That’s a threat. That’s a valorization of murder and a threat. It’s fascist. Oswald Mosley is long dead but there are fascist demonstrations again in London.

The group also expressed “deep regret” at the Paris terror attacks, which included a massacre at Charlie Hebdo, saying they were a “violation of Islamic law”.

Shaykh Tauqir Ishaq, a senior spokesman for the Forum, said “Perpetual mistakes by extremists, either by cold-blooded killers or uncivilised expressionists, cannot be the way forward for a civilised society.

“The peace-loving majority of people must become vociferous in promoting global civility and responsible debate. At this time of heightened tension and emotion, it is crucial that both sides show restraint to prevent further incidents of this nature occurring.”

Shaykh Noor Siddiqi, another Forum representative, said “The actions of the UK media in not publishing the cartoons is highly appreciated by British Muslims and we hope that this kind of self-restraint and mutual respect will ultimately lead to a harmonious society.”

A harmonious society in which any kind of criticism of or resistance to the prophet of Islam has become impossible. Saudi Arabia, in short.