I’ve been getting a barrage of hostile tweets and comments today about four fatal words in the post I did when I first learned of the Sydney siege, soon after it started. The one or ones I got that day – Sunday here – were reasonable and accepted my explanation and apology for clumsy wording. The ones today not so much. 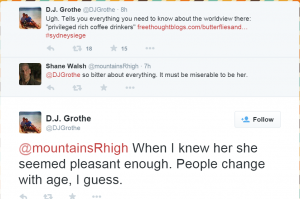 D.J. Grothe ‏@DJGrothe 8h
Ugh. Tells you everything you need to know about the worldview there: “privileged rich coffee drinkers” https://freethoughtblogs.com/butterfliesandwheels/2014/12/hostages-in-the-window-with-their-hands-up/ … #sydneysiege

Shane Walsh ‏@mountainsRhigh 7h
@DJGrothe so bitter about everything. It must be miserable to be her.

D.J. Grothe @DJGrothe
@mountainsRhigh When I knew her she seemed pleasant enough. People change with age, I guess.

K. R. Marlo ‏@KRMarlo 8h
@DJGrothe I see she backpedalled after being called out, but …. gross.

D.J. Grothe ‏@DJGrothe 8h
@KRMarlo Yeah. I imagine she feels proud of the display of compassion for the “apron wearing” proletariat victims.

That’s such an ugly thing to say. No, I don’t feel “proud” and it wasn’t a “display” – it was a feeling put into words, obviously not well enough but all the same that’s what it was.

This isn’t weird, or peculiar to me. After 9/11 I remember a lot of commentary about the “proletariat victims” who were in the towers along with the bankers and stockbrokers – that is, about the restaurant workers and maintenance staff and cleaners and security guards and all the unglamorous not very highly paid people who were doing support work that morning.

After 7/7 I was particularly upset about Gladys Wundowa. She was a cleaner on the night shift at UCL, on the bus on her way to school, the number 30 bus that blew up in Tavistock Square.

Mrs Wundowa, 51, finished her early morning shift at 9am on Thursday before heading for a college course at Shoreditch, east London.

I don’t apologize for being particularly upset about her. That doesn’t mean I think everyone else deserved to be blown up, it just means I find it particularly poignant when underlings get it. I’m not “proud” of it; it’s not particularly rational; it’s just a feeling. I get that sometimes.

And it’s not “ideology,” either. 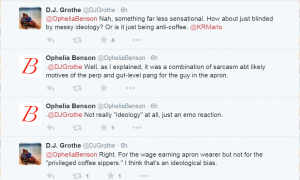 D.J. Grothe ‏@DJGrothe 6h
@OpheliaBenson Nah, something far less sensational. How about just blinded by messy ideology? Or is it just being anti-coffee.

Ophelia Benson ‏@OpheliaBenson 6h
.@DJGrothe Well, as I explained, it was a combination of sarcasm abt likely motives of the perp and gut-level pang for the guy in the apron.

.@DJGrothe Not really “ideology” at all, just an emo reaction.

D.J. Grothe ‏@DJGrothe 6h
@OpheliaBenson Right. For the wage earning apron wearer but not for the “privileged coffee sippers.” I think that’s an ideological bias.

I’d seen the photo of the “apron wearer” in the window. The photo got to me. I hadn’t seen photos of the other people. Those photos got to me too when I saw them yesterday, after the siege had ended. I’m human; I react to pictures.

So that’s been today. I did apologize for wording it badly, and I still do. But for having a not completely rational reaction to that picture? No.