So I was on a panel on multiculturalism should we worry about it on Saturday, moderated by Rebecca Goldstein, with Taslima and Katha and Sarah Jones. At one point Rebecca said we were agreeing too much so it occurred to me to try to fix that by bringing up not female genital mutilation but the male kind. (Instead of cries of outrage, though, there was some applause. Yet more agreement! What can you do.)

You already know what I think, unless you’re a new reader. I don’t think it’s parents’ “right” to cut off healthy bits of their infants for non-medical reasons. I don’t. I think the only reason we don’t recoil in horror at the very idea of cutting off a bit of the penis for no real reason is because we’re so damned used to it. Well isn’t that always the way violations of human rights go unnoticed for year after decade after century.

On the other hand to (some) religious people it’s a foundational part of their “community” and not doing it would deprive the child of the right to be included in that community. If you take that as a right, you have competing rights here. I don’t take that as a right, but some parents do. 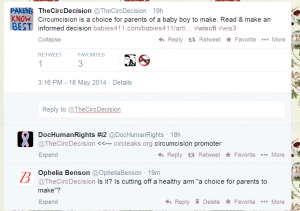 Circumcision is a choice for parents of a baby boy to make. Read & make an informed decision http://babies411.com/babies411/articles/circumcision-whats-your-decision-xnew.html …#wiscfi#wis3

No. It isn’t. It isn’t “a choice for parents of a baby to make” whether or not to cut off a head or a nose or an arm, and the same applies to a bit of the penis. Parents don’t have carte blanche to mutilate their children.

Missing parts » « A child who said No