The A-news people, who do that podcast I was invited to do, posted a podcast on Monday, the day I was invited.

Lee Moore, the guy who invited me, never mentioned the podcast, not when he invited me and not yesterday when I told him about  the tweet from the impersonation account (one of them) and Paden’s blog post. He never said a word about it. He should have, since half of it is about me (and my incomparable awfulness).

The second half is devoted to talking to some guy called Anton Hill. A few weeks ago this Anton Hill tweeted at me out of nowhere – I don’t know him, I’d never had any kind of contact with him, he was a total stranger to me – to demand that I give him evidence (or maybe he said proof) that the mildew pit is misogynist. I said no, do your own homework.

Oh my god call the cops!

I don’t have time or inclination to explain everything to every stranger who tweets at me. I explain things in blog posts, not in tweets to strangers.

But he thinks this is an outrage. Last week somebody sent me a link to a 19 minute video he did on the subject. Yes really! 19 minutes!

I only watched a couple of minutes. Those minutes are quite self-important. Apparently it’s a huge deal that he hassled me on Twitter and I refused to get into a long thing with him and eventually called him a creep – a huge deal in the sense that I did a terrible thing by not consenting to be harassed and by calling him a creep.

It looks remarkably like entrapment, this kind of thing.

People do it to me a lot. They monitor me and track me and follow me, they get in my face, then they make a federal case about whatever happens when they get in my face. Don’t think there’s any remedy in just ignoring them; then it’s a crime against free speech, it’s blocking, it’s banning, it’s refusing to engage with “disagreement.”

Here’s some of the serious thoughtful “disagreement” of Anton Hill a couple of hours ago: 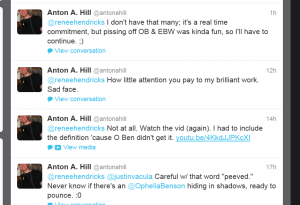 See how that works? Pretend to be all serious and committed to discussion and disagreement when that works, and admit it’s just pissing people off for fun when there are other funloving Watchers around.

Of course there are people commenting on his video to say that I “compared TAM to Nazi Germany” which is a shameless lie; of course thoughtful Anton Hill is swallowing the lie. On and on it goes.