Found this on r/atheism and it gave me a good chuckle: 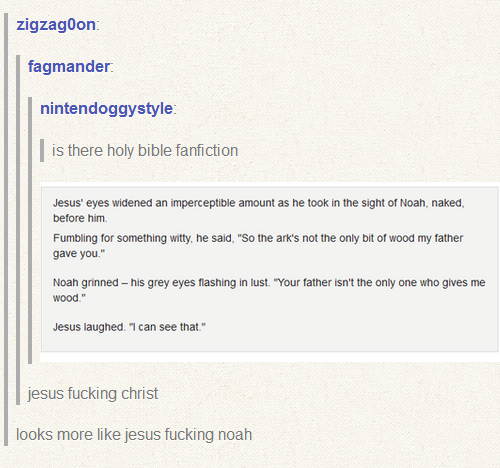 I’m not really chuckling at the blasphemy…more at the fact that it sounds eeriely like the fanfiction I wasted most of high school reading. Though come on, if we’re going to write Bible slash fiction, Jesus and his apostles OTP.

Feel free to write your own Bible fanfiction in the comments.

EDIT: I just read the usernames of the people who were posting in that image, and…oh boy. Bad sex puns, homophobic slurs, and pokemon names all in one place. Good job, internet *facepalm*

This is post 38 of 49 of Blogathon. Donate to the Secular Student Alliance here.