Today was the activities fair for all of the student organizations at the University of Washington. I was helping out the Secular Student Union booth, which was smack dab in an ocean of religious groups. Despite the fair organizers saying no one should set up before 10am, a dozen religious groups came super early to snipe all of the best tables. Some great religious ethics, right there.

We lamented the fact that no atheist student was going to wander into the religious section, but we did get a good amount of signatures. I shamelessly ate the free food that the religious booths were handing out. 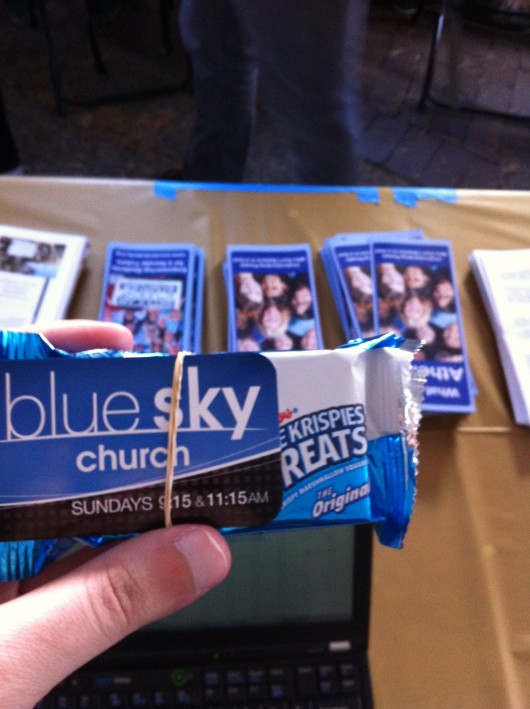 As I was looking around, I spotted a table that I needed a photo of: The Jesus Fan Club. If that name wasn’t enough reason for a photo, their apocalyptic advertisement sure was. 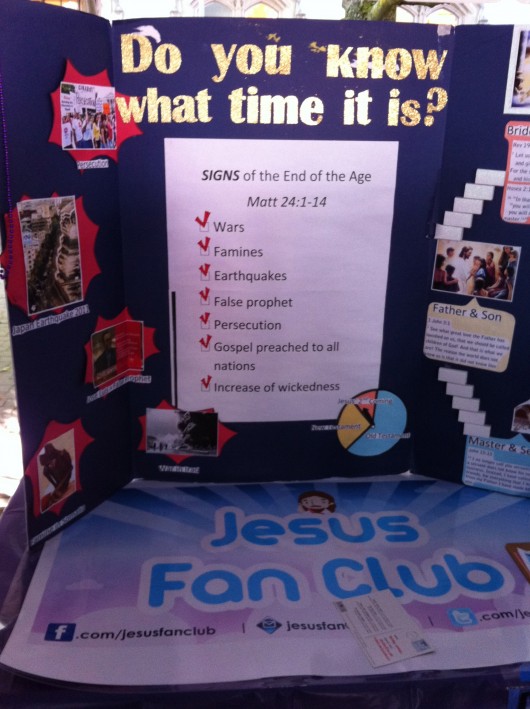 I went over to get a good photo. Then I forgot I was wearing my “Atheist, Ask Away!” sticker, and the girl working the booth approached me.

Let’s play the “How many apologetics can we fit into one fifteen minute conversation?” Game.

Christian: Oh, so you’re an atheist?
Me: …Yep.
Christian: Why?
Me: I haven’t been given enough evidence that would convince me that god exists.
Christian: So if someone gave you evidence, would you change your mind?
Me: Sure!
Christian: Well then I should tell you about all of the signs that the end times are coming…
Me: …Look, I’ve talked with a LOT of Christians and I have a feeling you’re not going to tell me anything new, but if you want to, go ahead.

She then went on to explain how all of the natural disasters, famines, wars, and HIV were proof that God was punishing his children. And that these things had risen by 200% in the last ten years. I blinked and didn’t even bother to confront the random statistics she was pulling out of her ass.

Christian: And the Bible proves these things, and even explains a lot about science that the people of that time wouldn’t have known otherwise.
Me: Oh yeah? Like what science?
Christian: …Let me get back to you on that.

She then explained that these natural disasters happen because God loves us. She asked me if I had heard of the story of Noah (…who hasn’t?) and said that was the perfect example. If a parent saw their children doing something bad, they would punish them instead of letting them keep hurting themselves. So God has to punish us with stuff like earthquakes.

I’m pretty sure she had no idea who she was talking about when it concerns the supernatural and earthquakes.

Christian: And when you look at earthquakes, they’re correlated with areas that are full of sin. Like Haiti, it had a very high rate of HIV.
Me: Earthquakes are also correlated with fault lines.
Christian: Well, God doesn’t break his own laws. So he has to use what he already has in place. Like if he wanted to punish Seattle, we’re more predisposed to earthquakes over other natural disasters, so he’d probably use an earthquake.
Me: That’s very convenient that God uses the type of disaster that’s already inclined to happen there due to random chance.
Christian: God has to work within the own laws he created for the universe, because God created everything. He can’t just like, stop the sun in the sky or something.
Me: …Except that God did stop the sun in the sky so one of his prophet could perform genocide on a whole race of people.
Christian: *look of shock* You know that story?!
Me: Yes.
Christian: Did you used to be Christian?
Me: No, I’m just well-read about the Bible.
Christian: The part about God stopping the sun is just a parable. A lot of people interpret the Bible wrong by interpreting it too literally.
Me: How do you know your interpretation is right? I mean, what if the whole Bible is a parable? What if God is a parable for the general goodness of people, and the whole thing is a story to teach us ethics? How do you know which parts are actually true?
Christian: They’re obvious.

The conversation then devolved into Pascal’s Wager.

Ah, that was refreshing, though it seemed a little unfair. Random Christian Undergrad vs. Person Who Has Been Writing and Speaking About Atheism for Four Years. And as tempting at the Mormon booth with their sign on the Five Absolute Truths was, I decided I had enough.

The first rule of Jesus Fan Club is you don’t talk about Jesus Fan Club. The second rule is to only use stupid arguments people have already debunked a thousand times. (Joke blatantly co-opted from Crommunist).

“People are terrible.” » « Do this now, OkCupid