Many parts of this image annoy me (click for bigger version), but my biggest gripe is this quote: “Humans have long considered themselves truly unique. But it turns out that the better word from ‘unique’ is ‘more advanced.'” 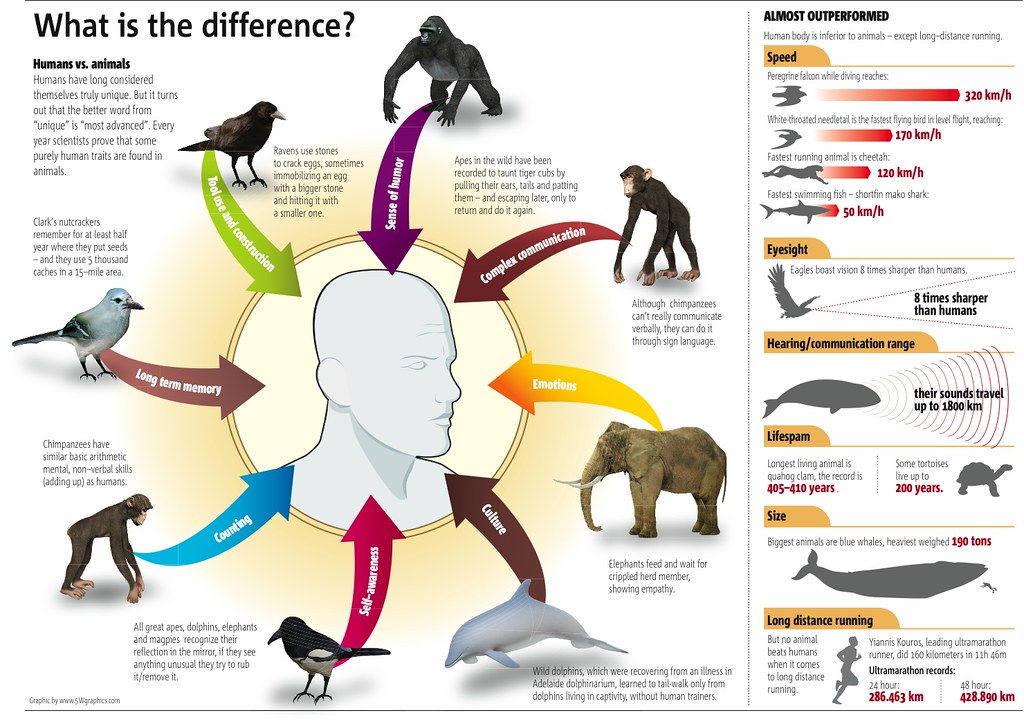 Sigh. No, “more advanced” isn’t the better word. In fact, it’s worse than unique. At least it’s true that we’re unique in that we have a certain combination of skills that other animals don’t have, though I’d still argue all animals are unique. But viewing humans as more advanced than the rest of the animal kingdom is a fallacy. It goes back to the Scala Naturae, or the Great Chain of Being. This was the idea that everything in the universe could be ranked in order of how perfect or advanced it was, with God at the top and amoebas and dirt at the bottom. Mammals are better than birds, hawks are better than pigeons, trees that bear fruit we eat are better than ones we don’t, etc.

But that’s not how things work. Through evolution, everything has had the same amount of time on this planet to evolve. Bacteria are just as adapted to their environment as a tree or a tiger or a human. While they’re less complex, I wouldn’t say they’re less advanced. Advanced implies that there’s some end goal in mind that we’re comparing them to, usually the wonderful Homo sapeins. Think of it this way. What if other animals considered themselves the most advanced, and were comparing us to them?

Dolphins: They can only hold their breath for a couple minutes? And they can’t echolocate? Ha! Even bats can do that!

Ducks: They can’t sleep with one half of their brain at a time? But what if a predator wants to come and eat them in the middle of the night! How will they escape if they don’t keep one eye open? Man, they are goners!

Swallow: Humans can’t instinctively migrate thousands of miles to a place they’ve never been before? They need maps and GPS, and they still get lost trying to find the Walmart that’s 15 minutes away? Wow, just wow.

Clark’s nutcracker: I can remember where I stored thousands of seeds across a 15 mile area over the winter, and you can’t even find your car keys. Humans.

Thermus aquaticus: A toasty 160 degrees F is the perfect temperature for me. You start breaking a sweat at 90?! What a bunch of pansies!

Yeah, we wouldn’t fare too well (and I could probably keep going with this list forever). There are plenty of things animals do better than us, but we don’t view those traits as important because we don’t necessarily need them. The environment we evolved in is different than that of a Clark’s nutcracker, so we don’t need that awesome of a memory. It goes both ways – Clark’s nutcrackers don’t need to have language or build fires or have long distance stamina. That doesn’t make them less advanced – they just had different evolutionary needs.

I still think humans are special – we can’t deny that we have certain traits not seen anywhere else in the animal kingdom, or the fact that we’ve actually developed civilization (minor point). But as a biologist, I see all creatures as special with their unique adaptation for their environment. We shouldn’t judge them by human standards.