I thought it would be more informative to look at Nate Silver’s state-by-state predictions of Obama’s vote share. That way, Nate could be wrong even in states like California.  So here’s what I did for each state: I took the difference between the final prediction of FiveThirtyEight, and the vote share reported by Google this morning.  Then I divided this difference by Nate’s margin of error.  See the results in a histogram below. 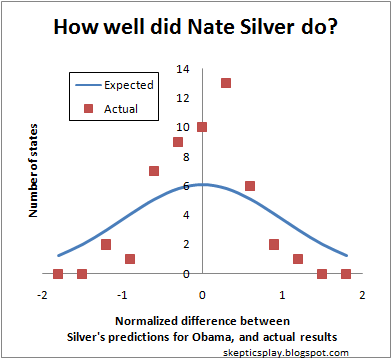 What the figure shows is that Nate’s predictions were more accurate than Nate himself claimed!

Reflections on my family » « Drowning, again