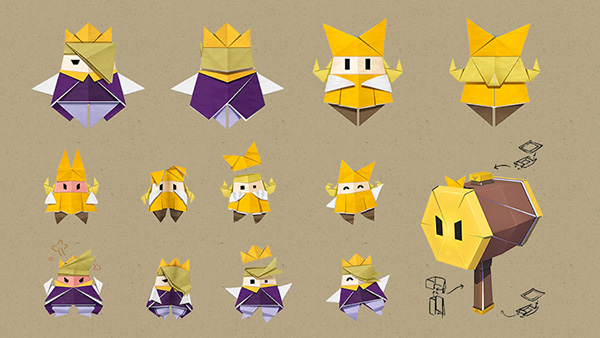 Olivia, designed by me.  Colored pencils were used to color it, and the hat is a separate sheet of paper that has been glued on.

Origami King includes colored pencils and tape among its villains, so I figure if the game isn’t an origami purist, I don’t need to be an origami purist either.  Also you can plainly see in the concept art that the hat is a separate sheet, so I felt justified.

I hear you asking, how can you make Olivia?  Probably the easiest way is to make Jeremy Schafer’s version.  Schafer a great designer, and makes good youtube videos.  As for my version…  Well, if you’ve never tried to design origami, it’s like this: a) easy to design, b) easy to fold, c) purist origami with one square, or d) final form looks how you wanted: choose one.  Except for me it’s choose zero.  Yes, you’re probably better off doing Schafer’s version.

For dedicated origamists, who would like to try it anyway, I don’t have folding diagrams, but I have an approximate crease pattern.  The hat isn’t included.  I improvised the hat.

COVID and perspectives on causality » « Moiré patterns with alternate shapes