This week was Aromantic Spectrum Awareness Week (ASAW). It’s a little visibility event that has been going on for a few years, but this year there’s been more promotion, so that I actually knew about it ahead of time. Also, this month I helped organize a blogging carnival and I wrote an article for my other blog, so now I’m fired up about it. These are my responses to the ASAW question prompts.

I suppose some readers might come here and just have no idea what I’m talking about.  Aromantic, what’s that?  Luckily I wrote up some aromantic basics.

I remember back in 2008 when I had a conversation with some college friends wondering why I had never been interested in anyone. My understanding based on cultural narratives was that, as a guy, I was supposed to be interested in some girl and then spend a lot of time waffling before finally summoning the courage to ask her out. I thought if it happened to me I would be courageous enough, but had hit a little snag: where was the girl? I went to an all-boys high school, and thought that I’d find someone after a few years in college, but there was nothing, not even close. My friends were completely unhelpful.

So fast forward to 2009 when I discovered asexuality by whimsical google search. Then I joined queer student groups at college, and became the radical SJW you know me as today. In that first year I also spent a lot of time reflecting on it, and realized that if anything, I was into men, not women. But you know, not so into men that it had even crossed my mind in all those years in an all-boys high school. It’s the easiest-to-suppress homosexuality ever. I started identifying as gray-asexual, which is just a label for people on the boundaries of asexuality (and what that means exactly is left ambiguous).

Of course, this is aromantic spectrum awareness week, not asexual awareness week (that one’s in October), so I should talk about that part. At the time, there were two major types of asexual people: romantic asexuals who wanted romantic relationships (generally without sex), and aromantic asexuals, who didn’t. I was firmly in the latter category. In fact I thought of myself as more aromantic than asexual, since it was all about “not being interested in” people, and whether a hypothetical relationship involved sex was a non-issue for me. When I started identifying as gray-asexual, I just dropped romantic orientation labels for a while, because there wasn’t the language for that. But today I would be described as gray-romantic, part of the aromantic spectrum.

So on the one hand, I didn’t talk much about romantic orientation because I didn’t identify with any particular label. On the other hand, I was pretty much talking about it the whole time, because to the extent I related to the asexual experience, it was really the aromantic asexual experience all along.

It should also be mentioned that I’m in a romantic and sexual relationship, and I’m even married. That’s hard to talk about which is why I love the ambiguity of the gray labels. I’ll just say that the whole “not into anybody” and “easiest-to-suppress homosexuality ever” are still real experiences to me, and yet they are consistent with my present relationship.

This prompt is asking about aromantic representation in media, and there are multiple dimensions to this.

First, there are explicitly aromantic characters. I’m not really familiar with any examples in popular media, but there have been a few in webcomics I liked: Supernormal Step, Heartless, and David Doesn’t Get It. I think aromantic asexual characters have lagged behind romantic asexual characters, because it’s harder to fit aromantic characters into standard story structures, unless aromanticism is an incidental detail. The three webcomics I linked present three different approaches–Supernormal Step treating it like an incidental detail, and Heartless turning it into a fantasy superpower, and David Doesn’t Get It being a journal comic.

Second, there are characters that are coded as aromantic. For example, there are an awful lot of narratives about people who are anti-love, but at the end they finally get over it and enter a romantic relationship. I know writers wouldn’t think of these characters as “aromantic”, but I think they affected my expectations of how my life would go, so. Yeah, I really hate these. You know, what I’d really like to see, is a story where one of the characters is super anti-love, but at the end they realize that there’s nothing wrong with love it’s just that they were aromantic this whole time.

Another topic is real life representation of aromantics, such as in news articles, documentaries, and public discourse. I think in this realm it’s pretty hard to disentangle aromantic visibility from asexual visibility, since aromantic asexuality is usually presented as an important part of asexual experience, but not as its own thing. This works fine for me, being both aro-spec and ace-spec, and anyway I grew up in the 90s where visibility was nil so I tend to think any visibility at all is pretty decent. But I can see it being a big issue for say, aromantic allosexuals (i.e. non-asexuals). Another thing that could use more visibility, is the concept of platonic relationships.

I do have a few criticisms of the current iteration of the aro community. First, I think they need to take more stuff off Tumblr. People on Tumblr often fail to appreciate how opaque the platform is to outsiders, and how ungoogleable too. Despite the large growth in discussion around aromantic allosexuals, the first google result is still an article that *I* wrote in 2015. Why? Because I published it outside of Tumblr.

Second, I think the aro community is too reliant on analogues of asexual concepts. This is especially obvious in the language, where basically every asexual word gets imported into aromantic language (e.g. sex-repulsed -> romance-repulsed), and I think there should be a little more thought about whether it’s really analogous. Of course, the nice thing is that anyone who understands asexual terminology automatically understands aromantic terminology too.

This part of the ASAW prompt just invites me to talk about whatever I like. Well I don’t know what to say, and if I think of something I can just blog more later. But here’s an origami model I made, using aromantic flag colors (previously posted here). 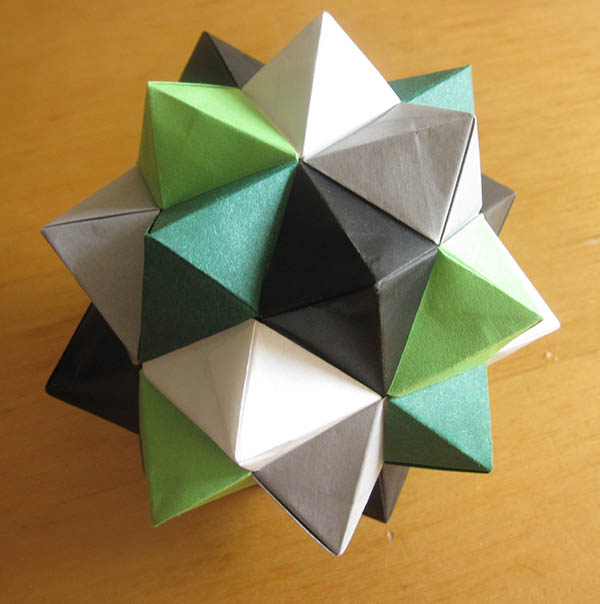 Race in Horizon: Zero Dawn » « Why video games are so flammable