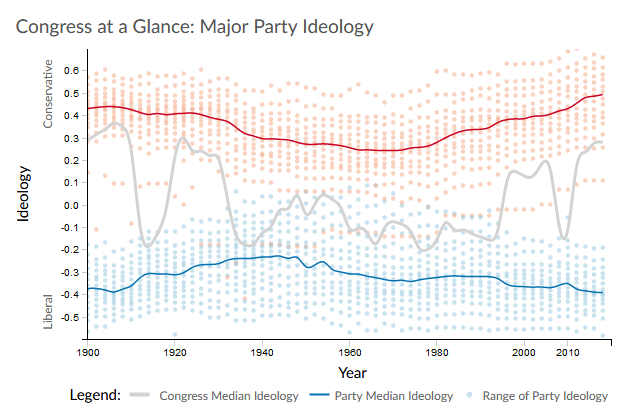 But my first reaction to this graph is, where the fuck do those numbers come from?

I ask, already knowing the answer. These numbers are DW-NOMINATE scores. NOMINATE is a wildly successful tool developed by political scientists in the 80s to quantitatively and objectively summarize the voting behavior of congress. DW-NOMINATE is the most commonly used version of NOMINATE, because it accounts for the changing views of of congress members over time.

I read a primer on NOMINATE so you don’t have to. NOMINATE uses a model, where each member of congress is represented by a fixed position on a two-dimensional political spectrum. Each time congress holds a roll call (i.e. a vote), a “yay” is represented by one point on the spectrum, and a “nay” vote is represented by another point on the spectrum. The member of congress is predicted to vote “yay” or “nay” depending on which position is closer to themselves. However, the model also has a probability that a member of congress will vote for the position further from themselves, and that depends on the relative distances of “yay” and “nay”, as well as the congress member’s error function. (In DW-NOMINATE, congress members aren’t in a fixed position, but are allowed to drift at a constant rate over time.)

To show this model in action, here is a graphical representation of a recent roll call in the senate. The bold dividing line represents the perpendicular bisector between the “yay” and “nay” positions.

The hard part is determining where on the map each member of congress is, and where “yay” and “nay” are located for each roll call. Basically, the positions are selected in such a way that it maximizes the likelihood that congress members would vote the way that they ended up voting. This is called maximum likelihood estimation, or MLE. MLE is computationally very difficult, but the exact method doesn’t matter for our purposes.

This whole calculation is done in an objective manner, without even looking at the substance of each of the votes. But of course, we have to eventually look at the substance of the votes, in order to understand what these two dimensions are. The first dimension appears to be the left-right spectrum. The second dimension appears to be primarily about race, and sometimes other social issues. The second dimension has become less important in the past few decades, I think because the issue of race is getting folded into the left-right spectrum. I believe the graph at the top only shows the position of congress along the first dimension.

I’m splitting this discussion into two posts. In the next one, I’ll talk about what asymmetrical polarization means in the context of DW-NOMINATE.

What does a DW-NOMINATE score of zero mean? » « Origami: Star with spirals