One thing I’m interested in is the theoretical economics of entertainment media. For instance, we know that people have a wide variety of tastes in movies, but movie producers aren’t necessarily interested in catering to everyone’s tastes, they’re just interested in maximizing profit. You can imagine situations where this would lead most movie producers to cater to the most popular tastes, and to ignore fringe tastes.

Disclaimer: I have no education in economics, I’m more of a game theory guy.

Monopolistic competition is a system where different firms produce goods that are differentiated from each other. To make the very simplest model, we’re going to imagine that goods are differentiated from each other along only a single axis. For example, suppose that each movie falls along a one-dimensional spectrum from “drama” to “comedy”. And where a movie falls along this spectrum is the only thing that could differentiate it from other movies. Some viewers prefer comedies, and some prefer dramas, and some prefer dramedies.

Well, maybe the movie metaphor is implausible, so let’s invent another metaphor. Suppose each “firm” is a candidate in a democratic election. The only way candidates are differentiated from each other, is where they fall on a left-right spectrum. Each voter also falls somewhere along this left-right spectrum, and each voter votes for the candidate that is politically closest to them. Each candidate chooses their political position in order to maximize votes.

The democracy metaphor also sounds implausible, so let’s try a third metaphor. Suppose we have a small town with a single street. The only way to buy lunch in this town is from a fixed number of food trucks. All food trucks are identical, and basically the only thing that differentiates the food trucks from one another is their location. Each day, the townspeople, who are uniformly distributed along the street, walk to the nearest food truck, and pay a fixed price for lunch.

The food truck metaphor is implausible too, but we have to settle on something, so food trucks it is. There are two perspectives to consider: that of the townspeople, and that of the food truck owners. The townspeople prefer to minimize their walking distance. The food trucks, on the other hand, don’t care how far people have to walk, all they care about is getting as many customers as possible. And we’re positing that the only way food trucks can distinguish themselves from each other, is by parking in different parts of town (i.e. we’re not allowing them to have different prices, different wait times, or different food). The question is, where should the trucks park?

When there are two food trucks, each truck prefers to be in the center of the town, right next to each other. When a third truck enters the game, that truck also wants to be in the center. But now that we have three trucks all right next to each other, the one in the middle is cut off from most of its business. So that truck prefers to move out from the middle. But now there’s another truck in the middle, and that truck is unhappy. Also, the outer trucks are unhappy because they want to squeeze the middle truck even more.  The trucks will continue to shuffle around endlessly, and it’s impossible for all three trucks to be simultaneously happy. 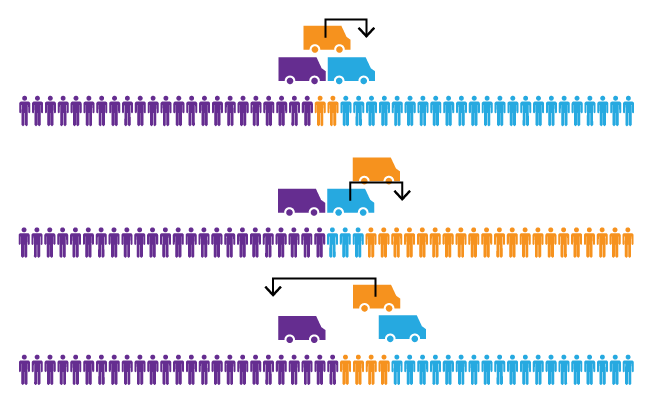 So the food truck problem has no solution. Let’s add a few extra rules to ensure that it does have a solution: 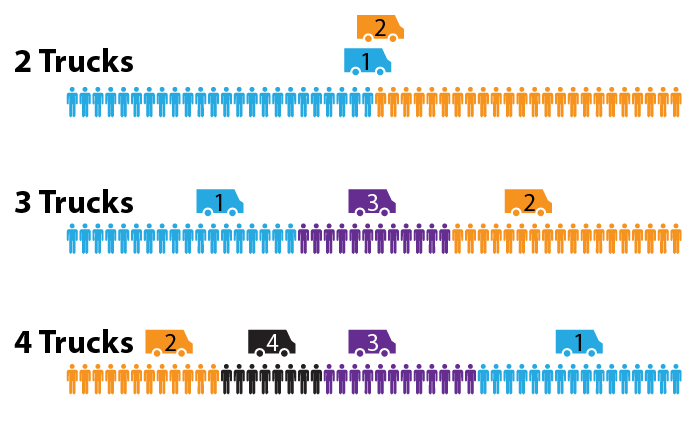 Let me make a few observations about these solutions. The food trucks that cater to the outskirts of town are generally more profitable. At the same time, we can say that on average the people on the outskirts have to walk longer distances.

So what implications does this food truck problem have on reality? None, probably. In the real world, people’s preferences are more complicated, people patronize more than one business, there are variable prices, and the optimal strategy is even harder to find.