This is a repost of an article I wrote way back in 2011.  I’m still proud of figuring this one out.

Out of all the digits, from zero to nine, one is the most common.  This has to do with the log scale.

The log scale captures an important fact that is true of many quantities in life.  Take money for instance.  If you have one dollar, then earning another dollar is great because you’ve doubled your money!  If you have a million dollars, earning another dollar does not make much of a difference.  Small changes matter less the more you already have.

This is true on a log scale too.  On a log scale, 1 is the same distance from 2 as 100 is from 200.  The higher you go up, the more the numbers all get smooshed together.  What does that mean for the digits from zero to nine?

In the above picture, I show a log scale.  And on that scale, I highlighted in blue all the regions where 1 is the first digit of the number.  You should see that the blue regions cover more than one tenth of the log scale.  In fact, they cover about 30%.  And so, if we pick numbers randomly on the log scale, about 30% of those numbers will have 1 as their first digit.

Just for fun, let’s apply this concept on the fundamental constants of nature.  I will compare two hypotheses:

Of course, it could be that both hypotheses are wrong.  It’s difficult to say that these constants are really random.  To talk about randomness, we’d need a whole collection of universes with different sets of fundamental constants so we can do some statistical analysis.  But clearly we have only one universe.  Luckily this one universe has 26 fundamental constants (as far as we know), which may be a big enough collection of numbers to do some statistical analysis.

Therefore, I will not choose which constants to use.  I will simply use the list compiled by John Baez and David Black.*  Note that 6 of the constants are unknown, so we’ll have to make do with the remaining 20. 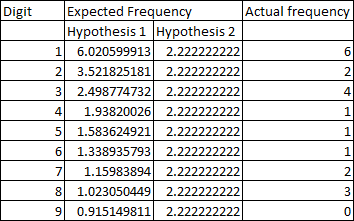 The frequency of first digits more resembles hypothesis 1 than hypothesis 2.  I also tried doing some Bayesian analysis.  If our prior belief is that the likelihood of each hypothesis is 1:1, then this evidence increases the ratio to 15.8:1.  In other words, if we previously thought they were equally likely, then after seeing this evidence, hypothesis 1 is almost 16 times as likely.  As far as evidence goes, this is fairly weak evidence, but you’re not going to get much better with only 20 fundamental constants.

Does this really mean fundamental constants are randomly distributed on a log scale?  Gee, I don’t know.  Probably not really.  What’s your interpretation?

Star Wars wars against itself » « I am graduating