This is the third part of a series about symmetry in origami.  Previously, I established the idea of a symmetry group, a set of transformations that leaves a model’s shape unchanged.  Next, I talked about how the colors of a model define a subgroup.  In this post, I will explain the concept of a normal subgroup.

We begin with a case study of one of my favorite models, Thoki Yenn’s Umulius.  “Umulius” is a Danish insult meaning “impossible person”. 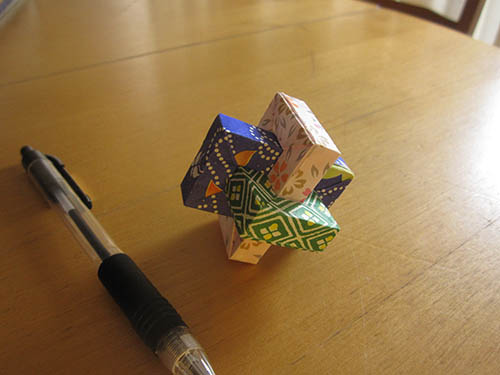 Ignoring the colors, the Umulius nearly has cubic symmetry.  Here I have a series of diagrams “cleaning up” the details to make the underlying cubic symmetry clear.

However, the Umulius’s symmetry group isn’t quite as large as the cube.  There is at least one transformation that leaves the cube unchanged, but which changes the Umulius.  The specific transformation I have in mind is a 90 degree rotation. 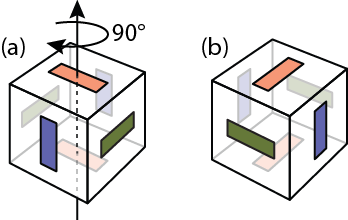 It will help if I contrast with another group where this does not hold.  Consider another object which I’m calling a Dotted Cube.

Just like the Umulius, we can consider several distinct dotted cubes.  There’s Dotted Cube (a), Dotted Cube (b), and Dotted Cube (c).  These different Dotted Cubes are just rotated from one another.  However, their symmetry groups are not the same. 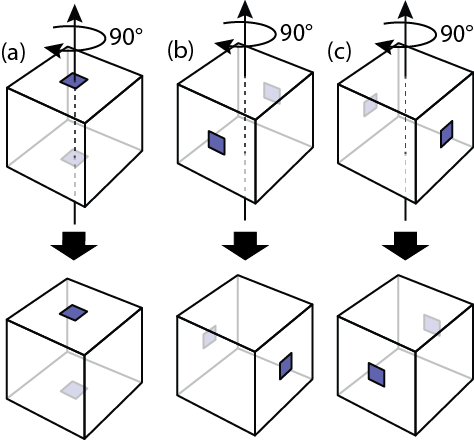 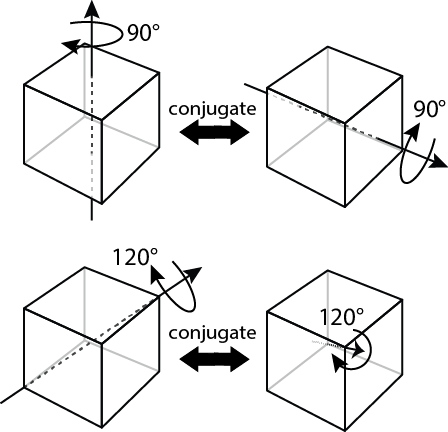 A normal subgroup is essentially a subgroup that is only conjugate to itself.

Why do normal subgroups matter?

In the world of origami, it’s just a matter of aesthetics.  Sometimes, normal subgroups look pretty, and that’s all there is to it.  Of course, there’s no requirement to use only normal subgroups.  Sometimes it’s also fun to deliberately break symmetry.

In the world of mathematics, normal subgroups are very important.  If we have a group G, and a normal subgroup F, then it is possible to define a quotient group, which we label G / F.  So in a way, it’s like G is “divisible” by F.

There’s also the concept of a simple group, which is analogous to prime numbers.  A prime number is divisible only by itself and by 1.  A simple group has only two normal subgroups: itself, and the identity group.  Simple groups are the atoms of group theory; they cannot be broken down into smaller parts.

Something that is really neat, is that mathematicians have classified all finite simple groups!  There are no simple groups unaccounted for.  Mathematicians have a proof!  The proof is spread across hundreds of scholarly articles, and I can’t even begin to understand it!  I feel like this is an enormous human accomplishment that deserves more appreciation.

I’m sorry to say that the icosahedral rotation group is a simple group, which means there are no Umulius-analogues for the icosahedron.