cn: sexual assault and victim blaming are discussed briefly as an example.

Often we observe some phenomena or trend, and we wish to explain what caused it. Different people can disagree on the cause. Or perhaps they agree on the causes, but disagree on which causes are important. Bold claim: There is no objective way to assess the relative importance of two causes.

1. Is a given human trait caused by genetics, or the environment?

2. Is personal success caused by hard work, or by lucky circumstance?

3. Is terrorism caused by politics, or by religion?

4. If a woman is victim of sexual assault, is that caused by the perpetrator, or by risky behaviors on her part?

5. Is our knowledge of physics the result of scientific research, or is it the result of the continuing absence of an earth-destroying supernova?

Among these examples, we’d obviously like to say that some causes are more important than others. We are welcome to say so, but there is necessarily an element of subjectivity in our words.

Of course, some ethical questions can be transformed into empirical ones. For example, suppose a problem is caused by X and Y, and we have some amount of money to address the problem. Would it be more effective to spend that money on X or on Y? Or suppose that I am a blogger without money, and I only have my words. Would my time be better spent writing about X or about Y?

Another complication is that different kinds of solutions have different externalities. Sexual assault provides an obvious example, where attributing assault to the victim’s behavior places undue burden on victims, and on at-risk populations.  (It may also be the case that changing behavior will not really help at all.)

No doubt you’ve seen many journalists discuss the role of nature vs nurture based on scientific studies. If there is no objective way to compare the relative importance of nature vs nurture, then how are scientists doing it? Scientists are actually measuring a quantity called “heritability”. 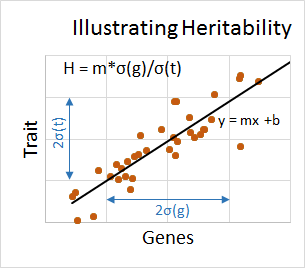 Note that this post is about philosophy, and since I am not a philosopher I’m speaking outside of my field. It’s a good reality check to see what philosophers have said.

The Stanford Encyclopedia of Philosophy refers to the present issue as causal selection. How do we identify causes, and what distinguishes them from mere background conditions? J. S. Mill argued that there is no basis for causal selection, and people seem to select causes capriciously. And then there are various rebuttals to Mill which you can peruse at your leisure.

Many people are inclined to view causation as a basic, or fundamental property of the world. But in fact, cause and effect are very human concepts.