Wall Street job destroyers and class-holes take note: A UC Irvine evolutionary biologist who made a killing in the vineyard business, shows the opposite of the cancerous greed-and-ignorance-are-good sentiment with a whopping $10 million donation to science, his community, and his adopted country:

Francisco J. Ayala, who was once a Dominican priest in his native Spain and who is known for taking on creationists in books and lectures about evolution, said the gift is a way of showing “gratitude” for his 24-year career at UCI. 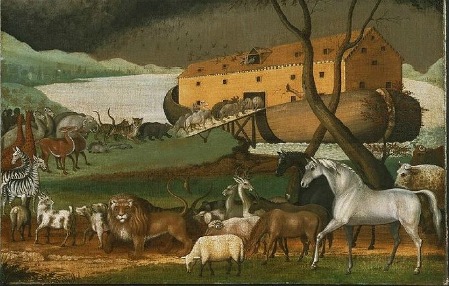 The sweet animals all boarded Noah's Ark two by two, the lion laid down with the lamb.

I was going to ask PZ about this, but on second thought and on the off chance he hasn’t seen it, I worried about his blood pressure and workload in the middle of the first round of exams. Instead I’ll tell you! Apparently our purportedly liberal friends in Hollywood have had a great idea, a full length, full FX, Big Screen adaptation of …. The Noah’s Ark legend!

Paramount and New Regency have agreed to fund Darren Aronofsky’s $150 million epic based on the biblical story of Noah’s Ark. Gladiator and The Aviator writer John Logan – he, uh, prefers you don’t mention Star Trek: Nemesis – has been hired to rewrite Aronofsky and Ari Handel’s script.

Now, now, I know, there will be much gnashing of skeptical teeth. But it’s not like Hollywood has been particularly helpful to science, or terribly concerned about portraying it accurately up until this sudden, uncharacteristic stab in the back. Think about the recent travesties Armageddon, Independence Day, The Day After Tomorrow and those are just a few A-list movies, where real money was ostensibly spent on science-y special effects (I sure hope it wasn’t spent on Bruce Willis’ or Ben Affleck’s acting). Not to mention other legend based movies like Sinbad, Aladdin, and Thor. The list of b-listers and worse goes on forever, Plan 9 From Outer Space, Catwomen From Mars …. It’s depressing to think that this is the same film industry that gave us crust shifting and land cyclones driven by cold engines. Science be Praised!