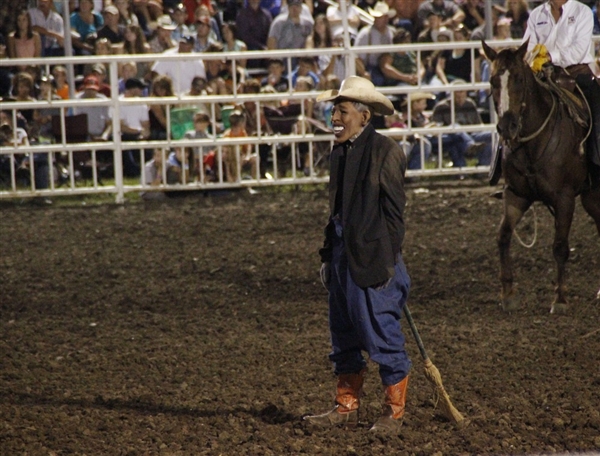 There is no joy in Teaville, the mighty clown has struck out. See, a few days ago a rodeo clown donned a less than flattering Obama minstrel-like mask and proceeded to get the audience all riled up with the help of announcers at the idea of stomping him into the dirt. Teatards know whose fault that is:

NBC — The controversial rodeo clown who on Saturday fired up a crowd at the Missouri State Fair by wearing a mask of President Barack Obama — and encouraging a bull to run him down — now has a standing invitation to perform in Texas, a Republican congressman said Wednesday. Though the clown has been banned from future state fairs in Missouri and the other performers have been ordered to undergo sensitivity training, Rep. Steve Stockman invited the rodeo group to perform in his congressional district near Houston.

“Liberals want to bronco bust dissent. But Texans value speech, even if it’s speech they don’t agree with… They want to crush dissent by isolating and polarizing anyone who questions Obama, even if it’s a rodeo clown with a harmless gag,” Stockman said in a statement.

It’s trickssy how he worked in that rodeo reference, no? Yes, we Texans value free speech, unless it happens to be free speech in the state capital opposing restrictions on reproductive rights. In which case free speech is suddenly an act of terrorism.

I’m not sure what the point was of banning this guy, though. Like it or not, he was well within his free expression rights to do this at a commercial event and that kind of thing only boomerangs. But either way the President had nothing to do with any of it. Which is to say the freaky right is outraged — outraged I tell you! — and they know who to blame, too:

LA Times — On Monday, the man you might call the head clown for racist humor in America put the blame for the Missouri embarrassment squarely at the president’s feet because the president had the audacity to discuss serious issues of foreign policy when he appeared with Jay Leno on “The Tonight Show” last week.

“When the president of the United States more often than not connects with the American people on late-night comedy shows,” opined Rush Limbaugh on Monday morning, “what else can happen other than the diminishing of the office?”

Sure, there’s stuff going on in Egypt, there’s a terrible economy that’s killing people, there’s an out of control Intel-Industrial complex and killer drones patrolling the skies the world over. But this is really serious. Maybe Obama should apologize to America for this whole ugly episode. If he hadn’t had the gall to win two Presidential elections, none of this would have ever happened.