The video above gives you basic understanding of the complex and morbidly fascinating pathology of arterial deposition and the role played by inflammation. But there’s more, as explained to be my cardiologist yesterday: substances such as a nicotine and other drugs, or even a good scare can lead to what’s called a plaque rupture and once that happens the next stop on the line a few moment down the road can include sudden cardiac arrest. 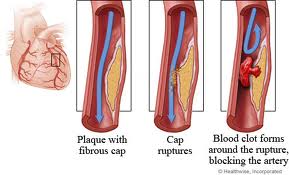 What happens is nicotine or other factors can cause an inclusion or underlying cells in the deposit to be relatively suddenly forced up, like a jagged piece of wood or ice rising and piercing the surface of the ocean. That newly exposed surface or edge rising above the plaque into the blood flow initiates a sequence of rapid events in which the components in the blood react exactly as if an open wound had been created. A clot forms around the exposed tip, it grows rapidly, as fast as a scab forms around a minor scratch. Once that inclusion is exposed to the coursing arterial blood and that clot starts to set up, the artery can be merely seconds to minutes away from complete blockage, and if that artery happens to be in the heart or lungs or brain — where roughly half the body’s blood volume resides at any particular moment – a heart attack, embolism, or stroke is imminent.

That’s also one reason blood clot inhibitors, even weakish ones like a baby aspirin, taken as the symptoms first appear can have such a dramatic effect, they slow down or stop the clotting process buying the victim time to get to an ER where more powerful clot busters can be administered. What’s really scary is a single incident, one puff off the first cigarette in the morning, a good fright, or anything that results in a spike of blood pressure or release of adrenaline, can precipitate this chain of events.