You’re going to hear it a lot now: The God Particle has been found. That’s deliciously close to saying God has been found and you better believe some people are going to run with that. I suppose, technically, they’re all God particles, if you believe in a prime mover anyway. But why this one? Why is it the God particle? 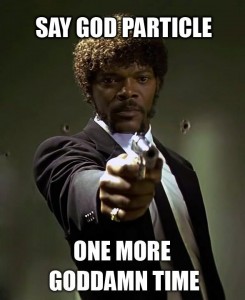 Most fundamental elementary particles have a familiar property we call mass. It’s an intutive concept: ask any five year-old if they can push a car up a hill and they’ll probably say no. And yet, understanding precisely why some particles have mass has been anything but intuitive! Mass is a bit of a mystery and not just for particle physicists. It’s an active area of research for cosmologists studying the literal beginning of space and time.

If you want to understand how really small things with little or no mass interact, such as electrons flowing through the molecules of a conductor or photons hitting atoms, quantum mechanics is your friend. If the idea is to model the behavior of big things with lots of mass interacting, like planets orbiting a star or galaxies full of dark matter colliding, you’ll need to master the mathematics of gravity. That means undertanding Newton’s work for an accurate approximation or Einstein’s General Relativity to get it to as many decimal points as needed. But if you want to understand really, really tiny things with lots and lots of mass interacting with one another, you’re shit out of luck. These two incredibly useful theories, that predict behavior so well in their respective domains, fail almost completely.

Fortunately, in everyday life, there aren’t a lot of really tiny things with huge mass. So the status quo binary theory approach works great. But one place where it does matter, no pun intended, is in the first few moments of the Big Bang. The early universe was really small, as small as it gets, yet nothing could be more massive. The entire mass of everything that was and ever would be was squeezed into a space as small as you want to imagine, and then smaller still.

To even begin to address the most fundamental questions, how the universe began, why it evolved the way it did, if there could be other universes or have been other universes, or how new universes might arise whatever that means, we need a marriage between General Relativity and Quantum Mechanics. See, it’s not that physicists want to marry two theories that don’t get along, it’s that the nature of reality forces them to try to arrange it!

The Higgs Boson is not the sole answer to these questions, but finding out whether or not that teeny-tiny little subatomic denizen exists, and how it works with other particles, could help in addressing the biggest questions conceivable. It’s not proof of God, it’s not evidence for an intelligent creator entity, if anything it could help us understand how the fuse on the Big Bang was lit without a God. No doubt some believers will misunderstand this: watching the usual suspects, who eagerly question radiometric dating or the Big Bang, dance around the most esoteric discovery in physics this millennia will be interesting to say the least.

The bottom line is the Higgs Boson will help us gain insight into the nature of the universe, it could break the current impasse between the Large and the Small, it could even help us understand why there is a universe at all. That’s part of the reason it got nicknamed the God particle (And as Tyrant notes in comments, that and marketing explain why the book by Leon Lederman was titled the same), or as some of my friends like to call it — at least up until today — the goddamn-where-is-it particle.

Daily Kos diarist and resident theoretical physicist, Science, is available for Q & A here, and Sean Carroll et all are live blogging events at Cosmic Variance.

Word is, no mermaids » « Chief Justice John Roberts takes long vacation outside of US