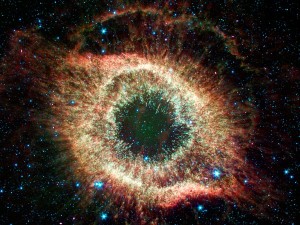 NASA has released the top ten images taken by the Spitzer telescope, and the same instrument has observed light across 41 light-years from a exo-planetary super-earth for the first time:

(MSNBC) — The planet 55 Cancri e was first discovered in 2004 and is not a habitable world. Instead, it is known as a super-Earth because of its size: The world is about twice the width of Earth and has about eight times the mass of Earth. Scientists have never been able to detect the infrared light from a super-Earth — until now.”

Spitzer has amazed us yet again,” Spitzer program scientist Bill Danch of NASA Headquarters in Washington said in a statement Tuesday. “The spacecraft is pioneering the study of atmospheres of distant planets and paving the way for NASA’s upcoming James Webb Space Telescope to apply a similar technique on potentially habitable planets.”

Spitzer first detected infrared light from an alien planet in 2005. But that world was “hot Jupiter,” a gas giant planet much larger than 55 Cancri e that orbited extremely close to its parent star. Other telescopes have performed similar feats since then, but Spitzer’s view of the 55 Cancri e is the first time the light from a rocky super-Earth type planet has been seen, researchers said.