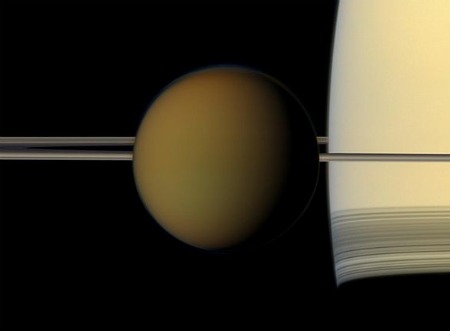 Titan, locked in thick clouds, with Saturn and rings in the background. Image courtesy of Cassini/NASA/JPL

Titan has always excited planetary astronomers and science-fiction writers. For good reason. It’s a romantic place, orbiting lovely Saturn, the ringed celebrity of the solar system, and its the only moon with a thick atmosphere. Titan has an active surface carved by wind and rain dotted with oceans and rivers where natural gas falls in big fat droplets and volcanoes spew water like lava. In fact Titan is composed of so much icy stuff that if it were as close to the sun as Mars about half the moon would evaporate into a giant puffball, by some guestimates growing to half the size of Uranus, before the volatile gases took flight on the solar wind and blew away in a massive cometary tail. It would make for a spectacular sight!

But those icy layers offer a possible alien refuge for life, and to understand a hypothetical Titanian biosphere we don’t have to look into deep space for evil green slime, we only have to look beneath our own oceans for exotic microbes and bizarre metazoans. 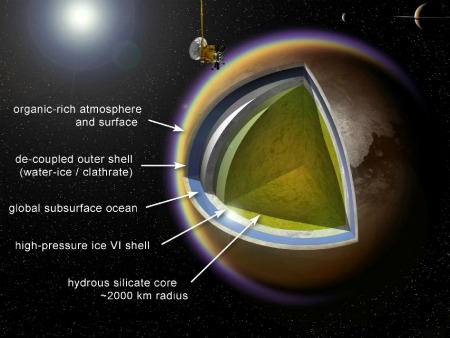 Like at least two Jovian moons and a dozen or more Saturnian cohorts, Titan may well harbor a hidden ocean of water beneath an icy crust. The top layer is thought to be an interesting substance, water ice and methane married in what chemists call a clathrate, also known as methane hydrate. Look a little closer at the boundary below that thin crust and there’s room to dream. Here’s why …. 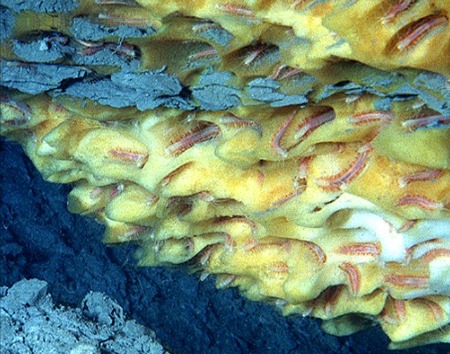 Yeah, that yellow stuff above is also a methane hydrate, sometimes referred to as meth ice, found in pockets on the bottom of our oceans. The little pink things are specially adapted bristle worms feeding on extremophiles; microbes that have evolved to survive on substances in or associated with the meth ice. These little pocket echo systems are completely independent of the traditional solar driven food chain we all know and love. If the earth went through another snowball phase where the entire surface was covered in thick ice, those biological communities would soldier right on without even noticing. 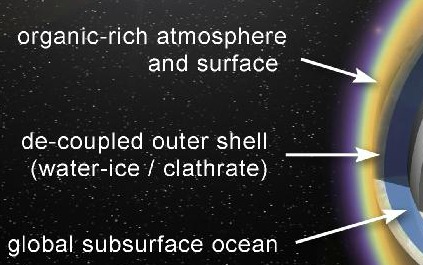 Now if we look at that interface between the methane-water clathrate “crust” of Titan and the global water ocean underneath, you see a potentially huge environment where that same kind of biology might conceivably hold. Why not? It does here, the water pressure would be similar, and internal heat from tidal flexing might even drive something like terrestrial black smokers, another pocket-sized ecosystem found scattered about in the inky marine blackness here on earth. If we want to get all sci-fi about it, on Titan this meth ice environment wouldn’t necessarily be restricted to isolated pockets like it is on earth. It could be everywhere that interface exists, festooned with black smokers or similar phenomena, a potentially robust biome that would be stable, safely sequestered away from sight and protected from the no doubt numerous impacts still occurring throughout Saturn’s system —  those gorgeous golden debris rings are there for a reason. In fact it could be a lot like the bottom of our oceans, or the surface of our planet, just alittle mixed up and inverted. A crazy upside down world, and get your stinking dirty paws off me you damn dirty ape!

To be clear, no one is saying such microbes are thriving on Titan, or rather inside it, or that anything complex has evolved around them. We don’t even know if the subsurface is arranged like this, the illustration is just an educated guess based on what little we know of the enigmatic world. Alien extremophiles are just rampant speculation on my part, although I wouldn’t be surprised if a few astrobiologists here and there occasionally dream about such things, too.

And even if something exciting like this is going on below Titan’s yellow-orange icescape, it would be hard to find out! Titan is the better part of a billion miles away, just getting there, let alone landing something on the frigid surface with the necessary instruments to detect dead organic remains in the surface ice, is a colossal engineering challenge. Erecting some kind of ET rig or dropping a melt capsule on the little moon to obtain samples for analysis from kilometers below the rock hard frozen surface probably won’t happen for decades at best. And given the recent budget cuts to planetary science proposed by the WH, it may not happen for centuries. Alas, for now we can only dream of what secrets Titan may hold. What a shame.