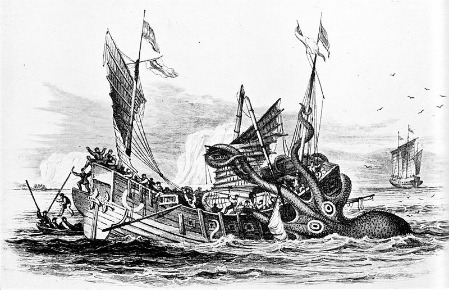 It’s big, it’s ugly, it’s legendary. It’s a tentacled alien monster with three hearts and a voracious appetite for living flesh. Meet the Kraken, or at least some circumstantial evidence for something like it:

There is no direct evidence of such a monster’s existence, let alone its intelligence. The entire tale is based on an untested hypothesis about a puzzling pile of bones that happen to belong to what were otherwise that era’s top marine predators: school-bus-sized ichthyosaurs. … When paleontologist Mark McMenamin of Mount Holyoke College in Massachusetts visited the fossil site this summer, it reminded him of an octopus midden, the pile of debris this animal piles up to conceal the entrance of its den. And now McMenamin is saying that a giant kraken, twice the size of the modern Colossal Squid, drowned or broke the necks of these ichthyosaur victims before bringing them home for dinner.

That does sound a little thin. But we all want the Kraken to exist, or at least to have existed, you know, back a long time ago when it couldn’t bother us. So it makes a fun story.