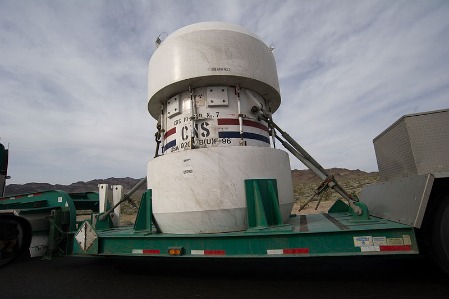 A nuclear waste container similar to those stored at the disposal site owned by Harold Simmons in the town of Andrews, Texas

An article by National Public Radio flips over some slimy rocks in Rick Perry country and finds the usual slithering political critters:

In his career as governor of Texas, a state where millionaires are plentiful and contribution limits are lax, Perry has raised about half his campaign cash from just 204 big donors, according to an analysis by the watchdog group Texans for Public Justice. And his administration has helped many of those donors, even when it comes to disposing of radioactive waste.

Guys like Simmons have been polluting politics as long as they’ve been messing with Texas. He was the biggest financial backer of Karl Rove’s Swift Boaters against John Kerry in 2004. True to hypocritical form he’s also the grateful beneficiary of the very government spending used to whip the wingnut foot soldiers into a frenzy. In 2003 a site owned by Simmons — located right next to a critical aquifer in West Texas — became the final resting place for radioactive waste produced all over the nation when the once public disposal program was privatized. And Simmons is happy to use his family to fuel his schemes. The New York Times reported that in 1993 that Simmons was found guilty and fined for using trust funds set up for his daughters’ to funnel illegal campaign contributions to conservative politicians.

Harold Simmons is a textbook example of Rick Perry’s pay-to-play political style alright. On the national stage that kind of unsavory association shouldn’t reflect well on anyone, especially someone running for President of the United States. But as long as Perry isn’t “palling around” with a college professor that may have said something radical back in the 60s, don’t expect to learn more about Simmons or any of Perry’s other crony donors watching Fox News or listening to Boss Limbaugh.