We need to celebrate the successes on the infectious diseases front and there has been a huge one that has been overshadowed by the focus on covid-19.There are many diseases that are water borne and create immense suffering to people who do not have access to clean water. One of those diseases is caused by the guinea worm. The good news is that tremendous strides have been made in combating it.

While the COVID-19 pandemic continues to rage around the world, another disease could be on its way out. Only 14 cases of infection with Guinea worm – a parasite that causes painful skin lesions – were reported in humans in 2021.

This is the lowest tally ever for an infection that, as recently as the 1980s, was found in more than 20 countries and infected 3.5 million people a year (see ‘On the way out’) – however, a remaining reservoir for the parasite in animals means eradication could be a while off, if indeed it is possible, say some scientists.

“It’s pretty amazing,” says Adam Weiss, director of the Guinea Worm Eradication Program of the Carter Center, which is headquartered in Atlanta, Georgia. The centre announced the numbers in late January. “Fourteen people on a planet of almost eight billion. It’s mind-bending to think about.” 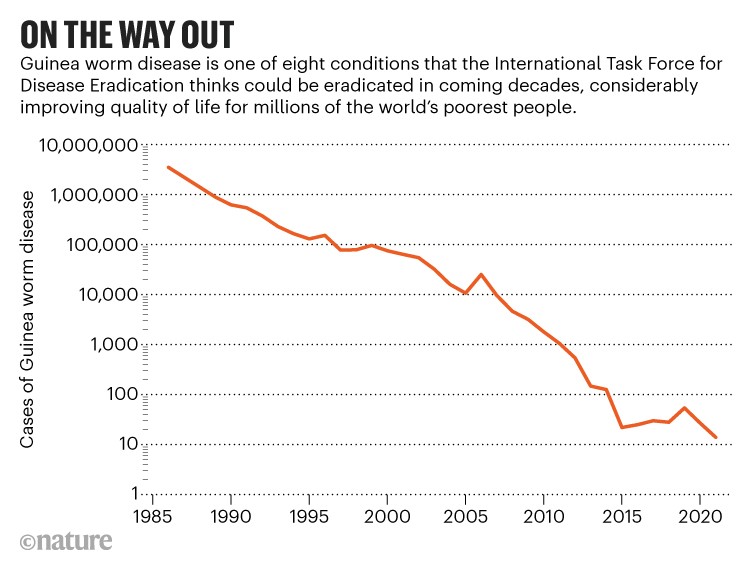 Note that the y-axis is logarithmic which tends to make the drop look less visually dramatic.

How was this success achieved? One of the methods is to use filters to remove the guinea worm larvae from water.

But the recognizable nature of Guinea worm disease also makes the parasite easy to detect. In Chad, where 7 of the 14 cases were reported last year, field agents create a network to track contaminated water sources, says Philippe Tchindebet Ouakou, the coordinator of the nation’s Guinea Worm Eradication Program, who is based in N’Djamena. They then prevent people from drinking the contaminated water and use pesticides to disinfect it.

Similar approaches have been used in countries such as South Sudan, Mali and Ethiopia, where the remaining 7 detected cases in 2021 occurred. These methods are what have kept case numbers low, says Ouakou, and could be used to tackle other endemic diseases.
…

Note that the list of potentially eradicable diseases includes four (poliomyelitis, mumps, rubella, and measles) for which vaccines already exist. This also illustrates how crucial it is to provide people with clean water.