Most people’s jobs involve some repetition. If asked to imagine some of the most repetitive and boring jobs, working on an assembly line or in a garment factory sweatshop would likely come to mind. The idea that well-paid professional musicians might have one of the most repetitive jobs would likely come as a surprise, because playing music is seen as a quintessentially creative endeavor and being creative is surely the opposite of boring.
END_OF_DOCUMENT_TOKEN_TO_BE_REPLACED

Have you ever asked a bank to forgive your loan because you couldn’t pay? The chances are that the thought never even crossed your mind because banks are known to be very hard-nosed and demand that you pay them back every penny you owe. That is because you are small fry and they will not even lend you any money unless you provide them with sufficient collateral that can cover the debt and that they can seize if you default.

A new report into Trump’s finances reveal that banks were willing to forgive $287 million in loans that Trump owed them.
END_OF_DOCUMENT_TOKEN_TO_BE_REPLACED

Seeking asylum in another country is the last refuge of desperate people. Leaving one’s home and fleeing with just the possessions one can carry, often with children in tow and traveling through dangerous territory where criminals can take advantage of your desperation, is not a decision that people make lightly. Hence the right to seek asylum is one that should be protected for the sake of simple humanity. But decency and humanity are not words that racist Trump and his racist cohorts understand and so it should not be surprising that they have almost completely destroyed even the limited protections in the US that were in place to protect the right to asylum
END_OF_DOCUMENT_TOKEN_TO_BE_REPLACED

The only measure of the health of the country that Donald Trump cares about is the state of the stock market and he warned in the last debate that if Joe Biden wins, the market will crash. But the idea that investors just hang around until after the election results are released to make their decisions is absurd. They usually try to anticipate the future and take steps accordingly. Since Biden has been leading in the polls consistently for some time, if investors really feared a Biden win, the market would have already tanked.
END_OF_DOCUMENT_TOKEN_TO_BE_REPLACED

Donald Trump loves to boast about the immense powers at his disposal. As Andrew Cockburn writes in the November 2020 issue of Harper’s Magazine (subscription may be required):

“I have the right to do a lot of things that people don’t even know about,” he boasted in March, ominously echoing his interpretation of Article II of the Constitution, which, he has claimed, gives him “the right to do whatever I want as president.” He has also declared his “absolute right” to build a border wall, whatever Congress thinks, and even floated the possibility of delaying the election “until people can properly, securely, and safely vote.”

END_OF_DOCUMENT_TOKEN_TO_BE_REPLACED

Jen Sorensen on the death of decency. 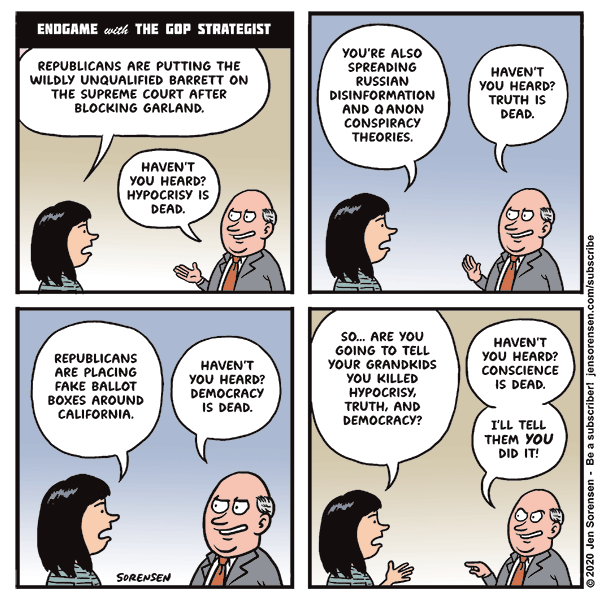 Meanwhile, Karen runs into some problems as she tries to vote

Texas has long been a strongly Republican state. Although every recent election has brought predictions that the changing demographics of the state will turn it Democratic, those tantalizing promises have invariably fallen short when it comes to actual elections. Part of the reason may be that the change in demographics is largely due to the increase in Hispanic voters and they are not as strongly Democratic as (say) African American voters. There are various explanations given for this, the main one being that the Hispanic community is socially quite conservative and Catholic, and Republican stances of opposition to abortion and LGBTQ rights may resonate more strongly with them, even to the extent to overcoming the racism that underlies many Republican policies and the explicit racism of Trump.
END_OF_DOCUMENT_TOKEN_TO_BE_REPLACED

I recently watched two comedies that have as their premise a fairly familiar plot line but each takes it in unexpected directions. In both a group of people who know each other well get together for a meal and then something triggers increasingly heated exchanges during which secrets and long-suppressed resentments are revealed in anger as people strike back at those whom they secretly dislike or think have hurt them.
END_OF_DOCUMENT_TOKEN_TO_BE_REPLACED

Trump keeps saying, contrary to all evidence, that we are turning the corner in dealing with covid-19.

I place great value on time. I am one of those people who makes sure that all the clocks in my home are kept right on time. When it comes time to change clocks due to the absurd practice of Daylight Savings Time, I go round the previous night and do so so that there is no danger of my doing something at the wrong time the following day. I am baffled by those who are not bothered that their clocks are wrong and find even more incomprehensible those who deliberately set their clocks fast in order to help them avoid being late for things. Having to constantly mentally adjust the time makes no sense to me.
END_OF_DOCUMENT_TOKEN_TO_BE_REPLACED