Stuart Stevens, a veteran political consultant for the Republican party who worked on the campaigns of Bob Dole, George W. Bush and Mitt Romney, is the latest in that long line. In his case, at least he did not support Trump in 2016 and did criticize him then, for which he was attacked by Republicans in turn. He has published a new book It Was All a Lie: How the Republican Party Became Donald Trump where he argues that Trump is the end result of a long process in which the party abandoned its policies of fiscal restraint, personal responsibility and family values. He argues that he now thinks that the party never really believed in those values, and he acknowledges that he too was partly responsible for taking part in that charade

In an interview he describes how the party became the White Grievance Party.

Dwight Eisenhower won almost 40% of the black vote in 1956 and even Richard Nixon in 1960 got a sizable chunk but support fell off a cliff with Barry Goldwater, who got just 7% in the Johnson landslide of 1964, possibly because of his opposition to the Civil Rights Act and his vote in the senate against it. Outside of the deep southern states of Alabama, Georgia, Louisiana, Mississippi, and South Carolina, Goldwater won only his home state of Arizona. Following the passage of the Voting Rights Act in 1965, Nixon in 1968 and the Republican party after that decided to go all in with the Southern strategy to exploit the white sense of grievance, and the slide has steadily continued since then, with Trump positively wallowing in the muck.

He says that what happened after Mitt Romney’s loss to Barack Obama in 2012 captured how far the Republican party had gone down the low road.

I think Reince Priebus, who was the chairman of the party then, and there’s a lot of credit for initiating that so-called autopsy. It’s always difficult to be self-critical. And what’s fascinating about that is the conclusions were fairly obvious. You had to appeal more to nonwhite, yet appeal more to younger voters who had to appeal more to women. But it was presented not only as a political necessity to win elections — because we’d only won the popular vote once since [the] 1988 presidential votes — it was presented as a moral mandate, that if you are going to deserve the right to be the governing party of this big, confusing, loud, changing country, you needed to reflect that. So then Donald Trump comes along, and you can almost hear this audible sigh of relief and all that got thrown out and go, “Well, thank God we don’t have to pretend we care about this stuff. We can just win with white folks and we can just be comfortable with that.” And I mean, it just showed how phony it was.

He looks at what the future might hold for the party.

I really am extraordinarily negative on the prospects of the party, and it’s an unusual position for me because I’ve always been sort of the eternal optimist and always thought that we could come back from any deficit.
…

There is a market for a center-right party and a need for it in America. I think something else will evolve. But to get a sense of how deep Trumpism is instilled, there’s another Republican Party out there and that’s these governors. So if you look at these very popular governors in blue states like [Larry] Hogan in Maryland, Charlie Baker, Massachusetts, Phil Scott here in Vermont, I work for all these guys. And if the Republican Party had any sense, I’d say, look, these guys are wildly popular in the hardest market. What can we learn from them? Instead, the party kind of treats them with benign neglect. But each of these governors, wildly popular as they are, they can’t pick their own party chairman. They’re Trump people, and the idea that a governor couldn’t pick a party chairman is so mind-boggling, it just shows how deep Trumpism has become in the party.

I think the Trump phenomenon will be the subject of analysis by political scientists for decades to come as they try to understand how a major political party could become so devoid of any principle, so hollowed out, that a person such as he could take it over and make even party leaders who have been in politics for decades and presumably had their own political base end up pathetically groveling before him. I think that one answer that has to be part of the mix of theories is that if a party stops standing for anything at all, even for simple decency, and just seeks power at any costs, it leaves itself wide open for a takeover by a sociopath. 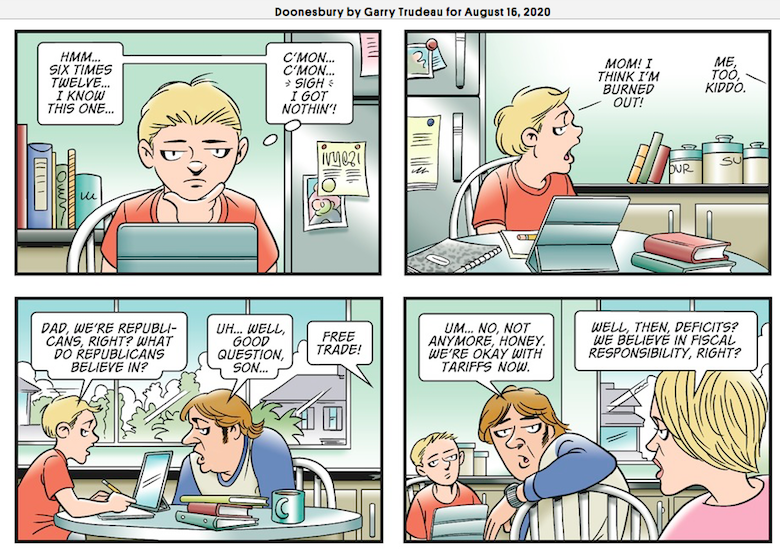 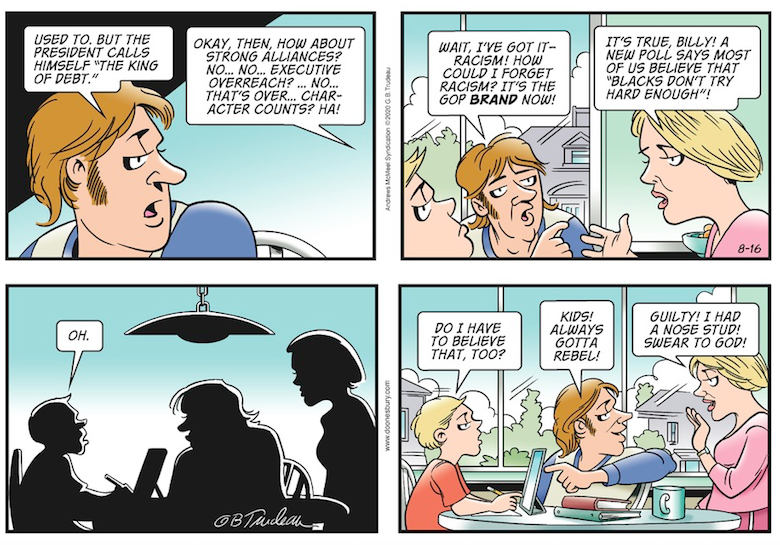 Even Trump’s sister despises him » « The Democratic convention