When Trump decided to send in his secret police to cities to confront demonstrators, it was clear that he thought there was political advantage for him to provoke conflicts between them and the protestors, that it would amplify his ‘law and order’ message, and that the sight of street clashes would result in people flocking to him. It is not clear that this is working and there are ominous indications for him that this may be a miscalculation.

As a candidate, Trump can appear to be cornered. Polling indicates that Americans think Trump is wrong about the street protests, they disapprove of his performance as president overall by more than 55% on average, and they disapprove of his handling of the coronavirus pandemic specifically by a whopping 60%.

But Trump has been cornered in the past, as when he was supposed to lose in 2016. Then as now, Trump lashed out on race.

Talking about crime in big cities “can be dog whistles for racial divisions” to Trump supporters, especially in the midwest, who as a group are older, more white and more rural than the average US voter, Azari said.

But emphasizing chaos in the streets is a questionable strategy for an incumbent president, she said. “For most swing voters, the question comes down to, ‘Are things good, are things not good?’ And I don’t see this story as being a really compelling way to reframe the situation as like, things are good’.”

The choice of Portland to stage his first confrontation may have been an error on Trump’s part. His racist message would have gone down better if his forces were attacking mostly black and young people. But Portland is an overwhelmingly white city (only 6% of its population is black). The unexpected development is the appearance of the so-called ‘Wall of Moms‘ who have come out in support of the protestors wearing yellow shirts (a nod to France’s yellow vest protests perhaps?) and placed themselves in between the secret police and the protestors. 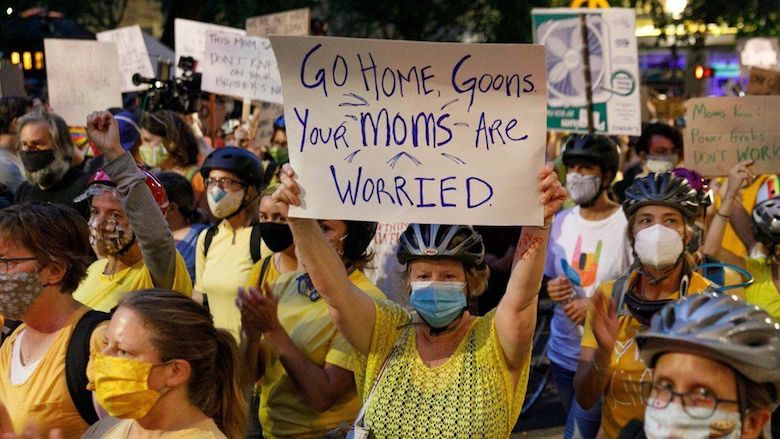 (You can see more photos of them here. Over at Pervert Justice, fellow FtB blogger Crip Dyke has first hand reports on what she is seeing in Portland.)

This appearance of mothers as an organized political force on the streets is something that was seen in Argentina and Chile when they held demonstrations to protest right-wing dictatorships using secret death squads to round up young people who were never seen again.

Trump has already lost considerable support among suburban voters, especially women, and the visuals of rough force including tear gas and lethal ‘non-lethal’ weaponry being used against mostly white, middle-aged, middle-class, suburban women is not going to go down well with that demographic. It has already spurred other groups to come out in support, such as the ‘Wall of Vets‘ consisting of military veterans who don’t like what they are seeing.

Another huge crowd tonight in Portland, including a new "wall" on the front lines: a Wall of Vets.

Here's a look at the line of military veterans getting set up here in front of the federal courthouse. Behind them, the Wall of Moms and the Wall of Dads are arriving. pic.twitter.com/gGnXHjI3k2

We now even have a ‘Wall of Dads‘ showing up with equipment that every typically suburban dad has, leaf blowers, and using them to turn back the tear gas onto the security forces.

Dads with leaf blowers slung over their shoulders, holding signs with messages such as “Fathers Against Fascism,” have joined the thousands of protesters who are now showing up in Portland nightly. Protests in Portland have continued for 50-some-odd days, with numbers increasing since the federal government agents arrived. Local and state government authorities have vehemently opposed the intervention/invasion of federal troops, who have used tear gas, flash bangs, and batons against protesters.

Not sure what the feds were expecting to happen, but according to Washington Post reporter Nick Miroff, a DHS official “expressed frustration and astonishment that Portland protesters were showing up with leaf blowers to disperse tear gas and send it right back at fed agents.”

The moms, dads, and vets have had some success confronting the federal forces.

Department of Homeland Security taskforce agents were again out firing waves of teargas and throwing stun grenades against a hard core of a few hundred demonstrators in the early hours of Wednesday morning. The confrontation centered on the courthouse at the heart of several blocks of downtown Portland that have effectively fallen under the control of the protesters after the city police withdrew.

But after pushing back demonstrators, many of them kitted out in helmets and gas masks, the federal agents retreated into their courthouse citadel to mocking jeers and women who were part of the “Wall of Moms” protest linking arms and chanting: “Our streets.”

This ritual was played out three times on Wednesday morning, but the end result was the same as every other night. The DHS officers dispatched by the president to put down the demonstrations have instead become prisoners of the building they are ostensibly there to defend.

If moms, dads, and vets in other cities respond similarly to their counterparts in Portland and keep forcing back the federal forces, Trump could have a major public relations debacle on his hands.

Well-known children’s entertainer Raffi, whose simple but catchy songs have enthralled children for decades, has released a song in support of the protestors. It uses Portland and the moms as the basis but that city name can be replaced by any other city name and moms can be changed to dads and vets. It may become a protest anthem across the nation for the middle-aged.

🙏❤️ in solidarity with #BlackLivesMattter, a tribute to the heroic protests vs injustice in Portland and elsewhere: an idea that woke me up 3 am, now recorded. thanks to @LinzMunroe (vocals) and Ivan Rosenberg (dobro). #PortlandMoms #ResistFascism #FloydGeorge #PortlandProtests pic.twitter.com/uzOIQKW056