We know that there is nothing that Trump loves more than to give long speeches to a large gathering of his fervent supporters. He seems to fancy himself as having powerful oratorical skills, possibly because his fans, like trained seals, laugh and applaud on cue at the right points. It does not seem to matter that the laugh lines consist of childish taunts, slurs, and derogatory nicknames. To him and them, they seem to be witticisms of the caliber of those delivered by Oscar Wilde.

But the days of those large live audiences are gone, killed by the pandemic and his low approval ratings. The Tulsa, Oklahoma rally was a total bust in terms of attendance. Then the Portsmouth rally scheduled for last Saturday was also cancelled, most likely because it looked like few would turn up for that too. The organizers promised to reschedule a new one but have not done so. While Trump can still reach large numbers of people with his Twitter account, that is clearly not the same for him. He has tried to convert press conferences into political rally-type events and give rambling speeches attacking his enemies but the journalists present are not going to give him the immediate positive feedback he craves and they may even stop showing these events live if the media feel that he is subverting the privileges given to press conferences.

But there was always one big event that he could look forward to and that was the Republican convention at which he would be re-nominated on the last day on August 27. That would be a large audience of Republican faithful who would go into raptures over his jibes and the whole event would be broadcast live over all the networks.

But now that event too is endangered. Initially, the convention was supposed to be held in Charlotte, North Carolina but the Democratic governor of the state Roy Cooper refused to waive the pandemic-related restrictions on the event that would require physical distancing and other measures that are anathema to Trump and his anti-science fans. The mayor of Charlotte is also a Democrat and she was not going to defy the governor. So in a fit of pique, Trump moved the convention to Jacksonville, Florida, a city that has a Republican mayor in a state that has an anti-science Republican governor in Ron DeSantis who is not enforcing common-sense safety measures even as the number of infections in his state keep rising rapidly, with each day setting new records. Trump must have felt that he would finally get the big rally he craved.

But yesterday came bad news from an unexpected quarter, his own party, that there would be restrictions. Ronna McDaniel, the chair of the Republican National Committee that organizes the convention, announced that the party will limit the number of attendees.

Et tu, Ronna? Speaking to 7,000 people in a 15,000 seat venue will look uncomfortably like a repeat of the Tulsa fiasco, where 6,200 people were in a 19,000-seat stadium. Can we expect a Trump Twitter broadside against McDaniel condemning her decisions? And we don’t even know what the state of the pandemic will be like in Florida six weeks from now. Already many Republican bigwigs have said that they will not attend. Some, especially those who are running for re-election, are suspected of using the pandemic as an excuse to distance themselves from Trump. If things get much worse, both in terms of the pandemic and Trump’s sinking poll numbers, there may be further restrictions and more cancellations. Just yesterday, the state had a record high of 14,000 new infections and a record high of 156 new deaths. 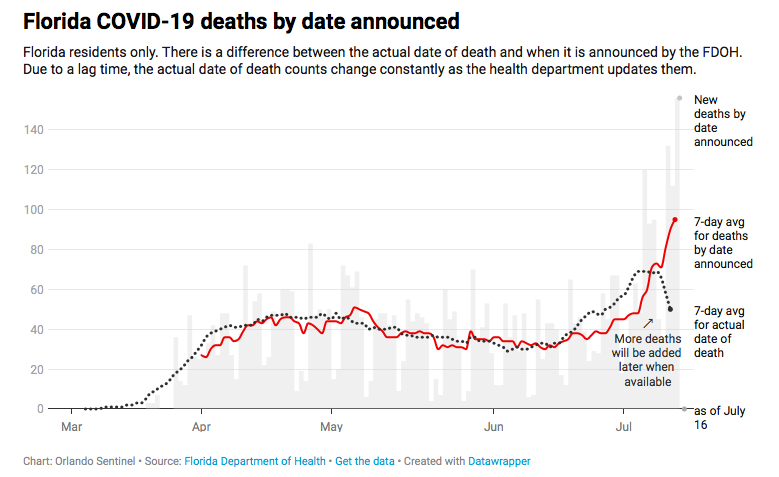 The Democratic convention will largely be a virtual one, which should suit that party just fine since their candidate Joe Biden is not exactly Mr. Charisma nor a polished public speaker.

In fact, I have found these party conventions to be utterly boring and never watch them. Long gone are the days when something genuinely important took place, such as spirited public debates over the party platform. Now party insiders decide the platform beforehand and the convention simply ratifies them. Furthermore, the platforms themselves are often ignored by the candidates. It also used to be the case that the vice-presidential choice would be revealed there, injecting a little bit of suspense into the proceedings. But now, that choice is also announced publicly ahead of the event.

What the conventions have largely become is an occasion to reward the party faithful with a four-day party where they can schmooze with other party faithful and for ambitious politicians to audition for future leadership positions. It is also the occasion where lobbyists, the wealthy, and corporations buy favors by donating large sums to the party as ‘donations’ to cover the cost of the convention, and also host lavish parties where they can hobnob with party officials and get promises of favors. In other words, it is part of the corruption that is endemic in US politics.

Perhaps one good thing that may come out of this pandemic is the permanent cancellation of this pointless event that now just serves as an occasion for corruption and excess.

One can only hope.