Donald Trump’s fixation with building his stupid wall along the Mexico border is enabling grifters to make money, and ProPublica describes one such effort.

The length of the border between the US and Mexico in Texas consists of the Rio Grande, so an imaginary line along the middle of the river marks the boundary. Of course, you cannot build in the river so the fence has to be built on land inside the US creating a weird no-man’s land between the fence and the river, land that belongs to the US but will become unusable, depriving the owners of the land of its use. Furthermore, since at times the river overflows and floods the banks creating swamps, the fence has to be built well inside US territory. In one region, the US government fence is more than a mile from the river.

Now some guy named Tommy Fisher has come along and said that he can build a wall right along the river bank and used his political connections to leverage money from the Trump administration to build three miles of fence, despite warnings from government engineers that the location is not suitable.

Fisher has leveraged his self-described “Lamborghini” of walls to win more than $1.7 billion worth of federal contracts in Arizona.

But his showcase piece is showing signs of runoff erosion and, if it’s not fixed, could be in danger of falling into the Rio Grande, according to engineers and hydrologists who reviewed photos of the wall for ProPublica and The Texas Tribune. It never should have been built so close to the river, they say.

There seems to be little point on Fisher building his wall there since the future government wall will make it redundant. Here’s a map of the two walls. 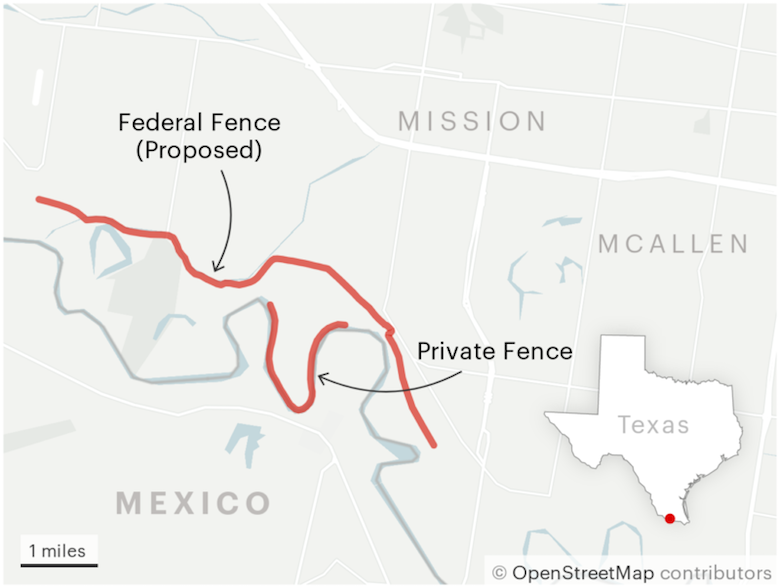 Furthermore, Fisher has sidestepped the approval processes necessary to protect the environment and the local communities, procedures that the government must follow before it can build.

I don’t think these people care at all about the long-term stability of the wall. Like everything with Trump, this is just another grift to please Trump’s xenophobic fans. It only has to last until November. By the time it collapses into the river, Trump and the builder and the money will be gone.