The rise of Bernie Sanders just before the Iowa caucuses has given rise to real concern in the Democratic party establishment that they might lose control of ‘their’ party and they are steadily rolling out critics. NBC News reports on a conversation that was overheard involving 2004 Democratic nominee John Kerry who is now canvassing for Joe Biden.

Former Secretary of State John Kerry – one of Joe Biden’s highest-profile endorsers – was overheard Sunday on the phone at a Des Moines hotel explaining what he would have to do to enter the presidential race amid “the possibility of Bernie Sanders taking down the Democratic Party – down whole.”

Sitting in the lobby restaurant of the Renaissance Savery hotel, Kerry was overheard by an NBC News analyst saying “maybe I’m f—ing deluding myself here” and explaining that in order to run, he’d have to step down from the board of Bank of America and give up his ability to make paid speeches. Kerry said donors like venture capitalist Doug Hickey would have to “raise a couple of million,” adding that such donors “now have the reality of Bernie.”

Kerry said later that his words were misunderstood/misinterpreted and issued a strong denial that he was considering entering the race or that he was worried about Biden’s chances.

As I told the reporter, I am absolutely not running for President. Any report otherwise is categorically false. I’ve been proud to campaign with my good friend Joe Biden, who is going to win the nomination, beat Trump, and make an outstanding president.

If he did say something along those lines, Kerry is right on one thing though, and that is that he is deluding himself. Just consider the facts. Bernie Sanders has done well by attacking the big banks and wealthy who run this country and whom he accuses of driving inequality. And so Kerry, an already very wealthy man, is concerned that he would have to step down from the board of the Bank of America, give up well-paid speeches to fat cats, and get venture capitalists to fund his campaign, thinks he might be just the person voters are looking for instead of Sanders.

Another critic who has emerged is former Maryland governor Martin O’Malley, who himself made a run for the Democratic nomination in 2016 but pulled out early after failing to gain any traction. He now teaches at various colleges and has issued a harsh criticism of Sanders, saying: “I would frequently tell my students, ‘Look, I know in my own generation we fell for the Nigerian prince scam, but how do you all fall for the Bernie Sanders scam?’ I don’t get that.” Really? He betrays a condescending attitude towards his students if he thinks that the people who are supporting Sanders do not have actual reasons for doing so but are as gullible as those who fall for the Nigerian prince scam. I actually thought that O’Malley had promise the last time around as a better centrist alternative to the center-right Hillary Clinton but he now reveals himself to be cut from pretty much the same cloth as her.

This widespread puzzlement as to why progressive ideas in general and Sanders in particular are gaining traction prompted Anand Giridharadas to give advice for those who are baffled by the surge in interest in those candidates who are bucking the establishment.

If your job is to explain politics, and you find yourself unable to fathom why real-change candidates have surged, why extreme capitalism is being questioned, why twentieth-century certitudes need not apply, don’t minimize just because you don’t understand. Start understanding.

This prompted the following tweets in response.

But let's also be realistic: A lot of people whose job it is 'to explain politics' are actually employed to push very narrow, status quo political points of view guised as analysis. They're reacting to their loss of influence and balk at the idea of understanding real change.

Echoes a quote on historiography I always remembered when studying history: "If you find any historical event seemingly inexplicable, it is because you haven't adequately investigated the surrounding circumstances. Investigate further and broaden your understanding."

The Iowa caucuses are tonight, beginning with voters assembling in their 1,600 precinct venues at 8:00pm and ends at around 9:00 pm (all Eastern Time), with results being released soon after. The process is quite different from primary voting. It is simple and short but requires voters to commit to at least an hour of their time. It looks like fun actually, a throwback to old-time gatherings in the public square to decide important issues, but the lack of secrecy about whom one is voting for might bother some.

It isn’t a secret ballot. In that venue, a representative for each candidate will be standing in a certain area of the room.

Voters have to go and stand in the area where their candidate is represented. So Joe Biden supporters would be in one corner, Elizabeth Warren’s in another, and Bernie Sanders supporters in another. Everyone is tallied.

For the Democratic caucuses, in particular, second choices are important. If a particular candidate does not attract 15% of total voters present, they are not seen as “viable” and are taken off the ballot, leaving their voters free to throw their weight behind another candidate. For example, a Pete Buttigieg supporter could sidle over to the Warren area.

Once the bartering for supporters is over, the votes are totted up, and state delegates are awarded to each candidate proportionately. That, in turn, determines how many national convention delegates each candidate receives.

Given the large field of candidates who are closely spaced in the polls, it is highly unlikely to produce a clear-cut result. So it will leave plenty of room for the spinning of the results that can leave one dizzy. 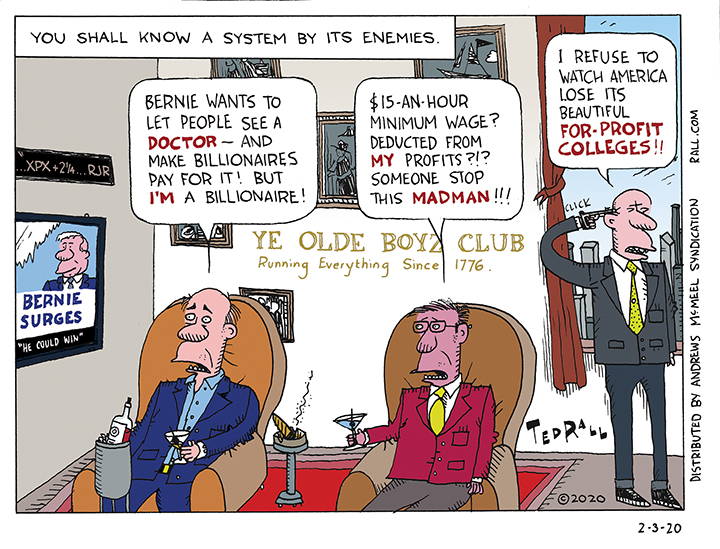 Establishment politicians and media journalists are increasingly concerned and hysterical about the possibility that the increase of Bernie Sanders’ performance in the Democratic primaries means that he could end up being elected president. Why are they so worried?