As we enter the last week before the Iowa caucuses on Monday, February 3rd, the first event in which actual voters get to indicate their preferences, the Bernie Sanders campaign is telling its volunteers to dial back the phone calls and instead focus more on talking to friends and neighbors. This may be due to their feeling that given the rising enthusiasm of the their supporters, this may be a more effective tactic of persuasion.

In the final week leading to caucus day in Iowa on February 3, Democrats there are bombarded with phone calls from pollsters, campaigns, and outside advocacy groups. That, in addition to baseline spam, creates a cacophony that is hard for campaigns to break through. It is far more effective, campaign leaders have argued, to have friends and relatives urge those close to them to come out to caucus than to carpet bomb phone lines, what is known as relational organizing. The campaign’s original goal for phone calls before Iowa was 5 million, but volunteers have already surpassed 7 million. The Sanders campaign did not immediately respond to a request for comment.

One sign of enthusiasm is the packed event held in Ames yesterday, even though Sanders himself could not attend, since he was attending the impeachment hearings in Washington. The event featured Rep. Alexandria Ocasio-Cortez and former congressional candidate Brent Welder, but the absence of the candidate did not seem to dampen attendance or enthusiasm.

Now in Ames w @BernieSanders and @AOC. I came to an Ames Bernie rally right before the 2016 Iowa Caucus & there were 1/4 the people. I’ve been to prez events here since 2000 and I’ve never seen anything like this. There’s also a packed balcony above and overflow room with 500 ppl pic.twitter.com/tv8izeSZIP

The New York Times has also released its last poll before the Iowa caucuses and it shows Sanders opening up a lead over his rivals. 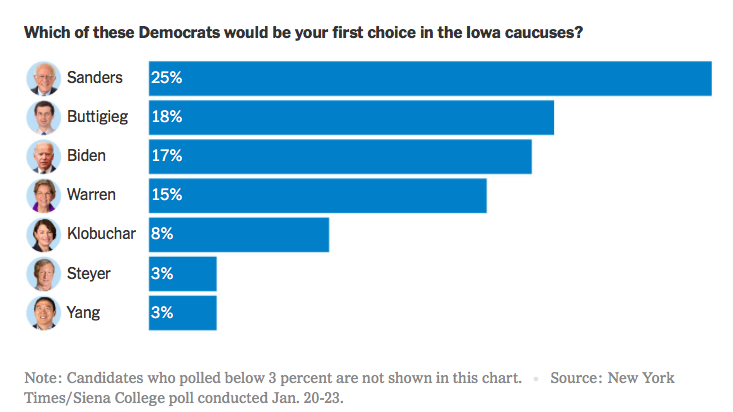 The establishment newspaper that has been openly worrying about the possibility of a Sanders nomination had, of course, to find a way to underplay the poll results and try and show that the party really wants a ‘moderate’ (i.e. a center-right) candidate.

The paper warns that a Sanders win in Iowa would be hard to overcome later.

A victory by Mr. Sanders in Iowa, where he suffered a narrow loss to Hillary Clinton four years ago, would represent a remarkable comeback for a 78-year-old candidate whose heart attack in October threatened to upend his candidacy. It would also create a moment of high anxiety for establishment-aligned Democrats who are deeply alarmed about a potential Sanders nomination.

Should he prevail in Iowa and face a similarly fractured field of mainstream rivals in New Hampshire, where he also currently leads in the polls, Mr. Sanders could be difficult to slow.

The paper pins some hope on voters changing their minds away from Sanders late in the process.

The Des Moines Register newspaper will publish its final opinion poll on the Iowa caucuses on Saturday night, just before the caucuses themselves on Monday, February 3rd. It is a highly regarded poll, respected for being careful in its methodology, knowing the local conditions well, and having a good track record. I am not sure why polls are released just before the actual election. Haven’t people decided by then? I suspect that late polls are released as a test of polls and to obtain bragging rights.

Meanwhile, Sanders is racking up the endorsements of local and state trade unions, as the national unions stay on the sidelines.

Sanders has already racked up 11 labor endorsements, more than any of his Democratic rivals, most of which are from local, regional and statewide unions. And some are among the most powerful labor organizations in early-voting and Super Tuesday states.

“He’s picking up more labor endorsements because the national unions, almost without exception, have not made endorsements, which implicitly or explicitly sets the local and regional unions free,” said David Kusnet, a former speechwriter for Bill Clinton who co-authored a book with an ex-AFL-CIO president. “He has a lot of friends and fans and supporters in the union movement, and some of them are succeeding in pushing their local labor unions to endorse him.”

The local endorsements are filling the political void left by national unions, still gun-shy after the acrimonious 2016 primary election left many rank-and-file members furious that their leaders supported Hillary Clinton over Sanders. Most are staying neutral for now, including some that have longstanding relationships with Joe Biden.

Five unions have come out for Biden, including three international or national unions, and three have gone for Warren, one of which is a national group that also co-endorsed Sanders. None has endorsed Pete Buttigieg.

I can see a whole lot of meetings being convened in establishment circles about how to deal with what must be being referred to as ‘the Sanders problem’. The Register has endorsed Elizabeth Warren and it remains to be seen if enough segments of the establishment can overcome their distaste of her progressive stances that, while less radical than those of Sanders, still threaten the oligarchy, and coalesce around her candidacy in sufficient strength to stop Sanders.