Take a look at this image. 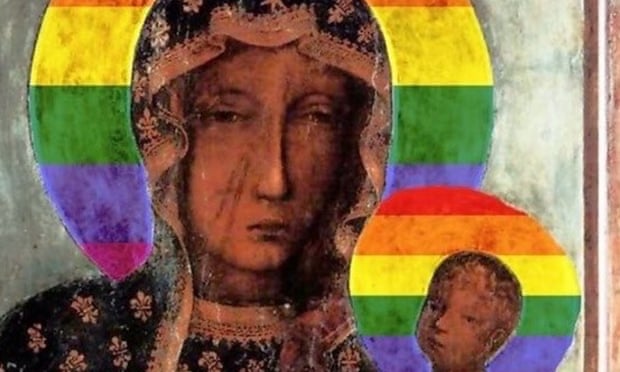 It may not be great art but seems pretty innocuous, no?

But it appears that the identical image but with a golden halo is a religious icon known as the Black Madonna of Czestochowa and the government of Poland thinks that depicting Virgin Mary and the infant Jesus with rainbow halos is a prosecutable offense because it “offends religious sentiment”.

A woman has been arrested on suspicion of offending religious sentiment, after posters bearing an image of the Virgin Mary with her halo painted in the colours of the rainbow flag appeared in the city of Plock in central Poland.

The Polish interior minister, Joachim Brudzinski, announced on Twitter on Monday that a person had been arrested for “carrying out a profanation of the Virgin Mary of Czestochowa”.
…

Offending religious feeling is a crime under the Polish penal code. If convicted, the woman could face a prison sentence of up to two years.

Brudzinski, who described the posters as “cultural barbarism” when they appeared overnight in April, said: “Telling stories about freedom and ‘tolerance’ doesn’t give anyone the right to offend the feelings of believers.”

Of course, pretty much anything will offend some religious believers. What this is all about is straight up homophobia, with causing religious offense merely the excuse for cracking down on any sign of support for the LGBTQI community.

To my mind the rainbow halos are actually an improvement, brightening up an otherwise drab and depressing image.