We are familiar with the ‘express checkout lines’ at supermarkets and elsewhere meant for those with fewer that a certain number of items. People who violate this rule can arouse a great deal of hostility. Some violate the spirit of the rule by claiming that multiple items of the same product should count as one. But there is a difference between ten cans of tuna and ten bananas in a single bunch. Most people would think that the former consists of ten items and the latter one item. But what if you have ten bananas in two bunches? Should that be considered one item or two? Would it matter if the two bunches are weighed and rung up separately or both placed on the scale at once and rung up as a single item.

This is of course, an example of a ‘first world problem’, an utterly trivial problem that few have the luxury to care about.

But I was thinking about that with this cartoon. 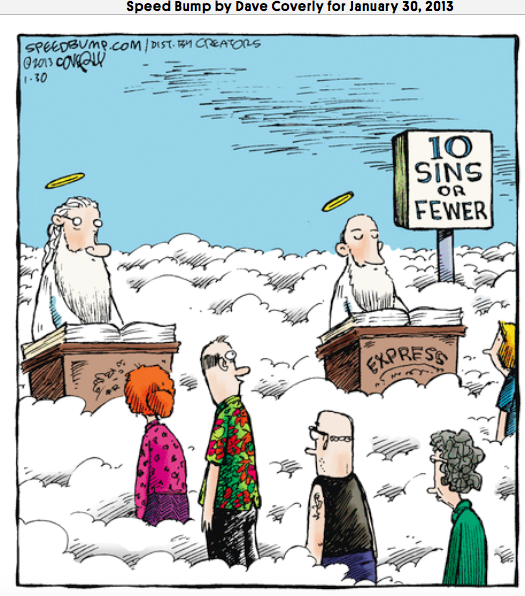 Should multiple occurrences of the same sin be counted as one? It is possible that Catholic theologians have considered this because it is in that religious institution that listing of one’s sins to a priest during confession is a requirement.