In September 2011, hundreds of protesters known as the Occupy Wall Street movement took over Zucotti Park in downtown Manhattan. It gave birth to the powerful and memorable “We Are the 99%” slogan that so succinctly and yet accurately captured the huge and growing income and wealth divide in the US. Emily Stewart looks at what that movement spawned. (Link thanks to Cory Doctorow.)

Just seven weeks later, police cleared the park and the protest ended. In the short term, the movement appeared to have failed.
…

But today, Occupy Wall Street no longer looks like such a failure. In the long run, Occupy invigorated ideas and people that influence today’s American left and Democratic politics.
…

Occupy was the birthplace of some left-wing ideas that have gained mainstream traction: Its “99 percent” mantra, which decried the concentration of wealth and power in the hands of a few at the expense of the many, has endured. It animated the rise of Sen. Bernie Sanders (I-VT) and the resurgence of the Democratic Socialists of America, and it is in ways responsible for the some of the most prominent ideas in the Democratic Party right now: free college, a $15 minimum wage, and combating climate change. It was also a training ground for some of the most effective organizers on the left today.
…

Georgia Sagri, a Greek performance artist, told me she came up with the “we are” part of the slogan and Graeber the “99 percent.” Others say the idea was collaborative. Ultimately, it distilled a precise way of talking about the message of Occupy and spoke to the effects of inequality so many people were feeling. Organizers began to hand out fliers that read, “We, the 99 percent,” the slogan’s first iteration.

The image it provoked was an evocative one: It pitted the very upper echelons and wealth and power against the masses, and it set up a framework for thinking about how the political economy works.
…

Many of those I spoke with connected the Fight for 15, a national movement for a $15 minimum wage and union rights, to Occupy. New York City fast-food workers walked off the job in protest for higher wages a year after the first Occupy protests. It was orchestrated by a number of community and civil rights groups, including New York Communities for Change, a community coalition and an early public backer of Occupy.

Stewart goes on to describe the people who moved on from Occupy to other organizations that have pushed for these progressive goals.

One thing that Stewart does not explore is the possibility that the Occupy Movement, being largely made up of young people, may have been the inspiration for other young people’s movements that have sprung up, such as the students organizing for responsible gun policies and demanding action on climate change. We even have a Swedish teenager Greta Thunberg becoming a forceful voice for the urgency of dealing with climate change worldwide.

Greta Thunberg cut a frail and lonely figure when she started a school strike for the climate outside the Swedish parliament building last August. Her parents tried to dissuade her. Classmates declined to join. Passersby expressed pity and bemusement at the sight of the then unknown 15-year-old sitting on the cobblestones with a hand-painted banner. 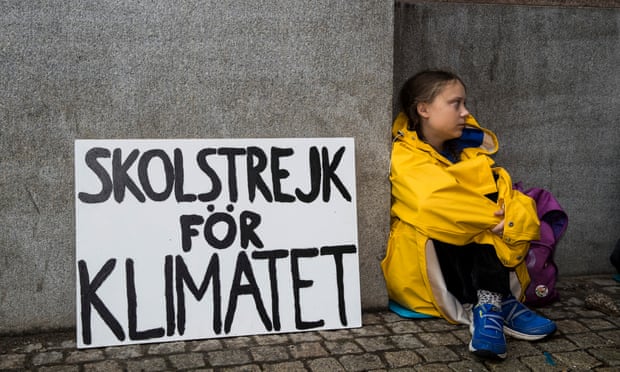 Eight months on, the picture could not be more different. The pigtailed teenager is feted across the world as a model of determination, inspiration and positive action. National presidents and corporate executives line up to be criticised by her, face to face. Her skolstrejk for klimatet (school strike for climate) banner has been translated into dozens of languages. And, most striking of all, the loner is now anything but alone.

On 15 March, when she returns to the cobblestones (as she has done almost every Friday in rain, sun, ice and snow), it will be as a figurehead for a vast and growing movement. The global climate strike this Friday is gearing up to be one of the biggest environmental protests the world has ever seen. As it approaches, Thunberg is clearly excited.

One after another, veteran campaigners and grizzled scientists have described her as the best news for the climate movement in decades. She has been lauded at the UN, met the French president, Emmanuel Macron, shared a podium with the European commission president Jean-Claude Juncker and has been endorsed by the German chancellor, Angela Merkel.

In the UK, opposition Labour party leader has called for, and parliament has endorsed, the declaration of a formal state of emergency on climate change.

MPs have endorsed a Labour motion to declare a formal climate and environment emergency, with Jeremy Corbyn hailing the move as a necessary response to school climate strikers and groups such as Extinction Rebellion.

The Labour leader said the decision by the Commons to pass the motion without a vote “can set off a wave of action from parliaments and governments around the globe”. Conservative MPs were told to not oppose the motion.

An official advisory panel to the British government has called for zero carbon emissions by 2050.

The UK government must immediately set a legally binding target to cut greenhouse gas emissions to zero by 2050, its official advisers have said, signalling an end to the nation’s role in driving climate change.

Doing so will be challenging, said the Committee on Climate Change, meaning the end of petrol and diesel cars and gas boilers, less meat on plates, quadrupling clean electricity generation and planting an estimated 1.5bn trees.

It will require tens of billions of pounds of investment every year, the CCC said – about 1-2% of Britain’s GDP. But not acting would be far more costly and the changes would deliver a cleaner and healthier society, the advisers said, as well as potentially bolstering the UK economy and jobs.

The US is way behind but young people here are also trying, like those who challenged Senator Diane Feinstein over her lack of support for the Green New Deal.

One of the great benefits of my teaching career was that it brought me into regular contact with young people and they impressed me no end with their idealism, passion, and energy. I used to wonder if that was a local phenomenon, reflecting just the narrow spectrum of students who would attend a private university like mine, since they contradicted the media stereotype of millennials as self-absorbed and careerist. But now I think that they were reflecting the attitudes of their generation, and that is a heartening sign.