The field known as particle physics has as an important goal the search for the fundamental constituents of matter and it has proved very fruitful, leading us to our present understanding of matter being made up of quarks, gluons, and leptons. Pretty much everyone has heard of the Large Hadron Collider, the massive accelerator of radius 27 km near Geneva that was built mainly to search for the Higgs boson, and found it. But as is always the case with physics, immediately after any discovery comes the question: What next? And in this case, the answer is not clear. The Higgs was the last remaining particle in the Standard Model of particle physics so in one sense one can say that that chapter has come to end. But is the end merely that of the chapter or is it the end of that particular physics book, that we have reached the end of particle physics and all that remains are just mopping up operations?

Such questions do not have easy answers and so the physics community is in a quandary as to where to go from here. At the moment the LHC has shut down for upgrades to raise the luminosity of the machine where ‘luminosity’ refers to the number of particles colliding. But the particle physics community is already drawing up plans for a next generation accelerator called the Future Circular Collider, an even larger one on the same site that would have a circumference of 100 km. 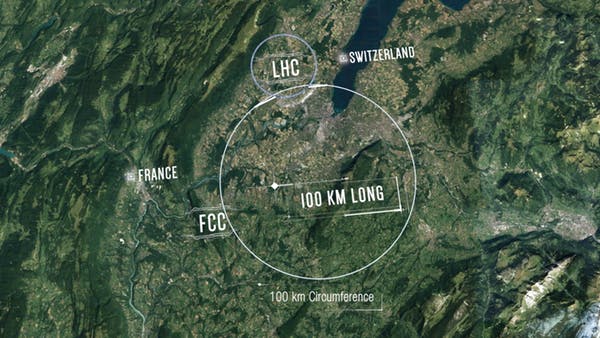 The FCC would initially be an electron-positron collider which is much ‘cleaner’ that the proton-proton collider that is the LHC. The latter collisions are sometimes described as smashing two watches together and then searching through the debris to find tiny parts. Electron-positron collisions are much more precise and easier to control and analyze. In the second phase, the FCC would revert to being a messy proton-proton collider but with energies close to 100 TeV, much higher that the current LHC energies of 13 TeV

As you can imagine such a large project is going to be very expensive, of the order of $10-20 billion, though the cost is very likely to rise as time goes by. Proponents of the FCC are touting that it could lead to all manner of astounding discoveries but critics says that such claims are highly speculative and lack the solid theoretical basis that the Higgs had. But that has not stopped a level of theorizing that has alarmed some physicists.

Theoretical physicist Sabine Hossenfelder is optimistic about the future of her field, seeing many potential avenues of exploration. Questions about the nature of dark matter, dark energy, zero-point energy, quantum gravity, the measurement problem in quantum mechanics, all present fascinating puzzles for physicists to untangle.

But she also warns that we may have reached the “nightmare scenario” in a particular branch of the discipline: particle physics.

The problem? The best theories imply that there may be no more new elementary particles left to discover.
…

She argued that physics has entered something of a crisis as the nightmare scenario draws closer, and many unscientific, speculative and ad hoc theories have been published. Researchers have incentives to concoct new hypotheses and models that posit the existence of particles that could, in theory, be detected at attainable collider speeds. But there’s no credible basis for most of these theories, she said — they’re essentially fantasies dressed up in math. Anyone can create farfetched and falsifiable claims, but unless they’re somehow grounded in reality, there’s little value in disproving them..
…

[Particle physicist Adam Falkowski] also said he cringed when he heard advocates invoke claims about potential new particles, dark matter, or the relationship between matter and anti-matter to justify the collider.

The chances that the collider would shed light on these topics “are pretty slim,” he said.

That brings us to one of Hossenfelder’s biggest complaints about the collider. While its advocates are making dubious arguments in its favor — she argued that a promotional video for the project was “full of lies” — they’re asking for a massive amount of money for it: $10 billion, at the low end of the estimate, ranging to over $20 billion.
…

What’s “nightmarish,” Falkowski said, is that physicists don’t have a plan to solve these mysteries. For decades, there had always been a clear path forward. Starting in the 1950s, they started building particle colliders and making discoveries. And there was always a good reason to build the next, bigger collider.

Now, while the justifications for building another collider are getting thinner, the costs are getting higher. And the costs don’t only come in dollars but in time. The next collider, if built, might not come online until 2040, and it won’t be fully operational until the 2050s — pushing the bounds of many working physicists’ lifetimes.

As I discuss in my forthcoming book THE GREAT PARADOX OF SCIENCE: Why its theories work so well without being true that will appear some time this summer (it’s been a while since I plugged it!), when areas of physics reach this kind of dead end, more and more speculative theories are proposed that are exciting but less grounded in data. What we are seeing in particle physics now is a replay of sequences that have happened many times before but in a more extreme form.