We all know that some hot days feel fairly comfortable while others at the same temperature feel clammy and muggy. We tend to identify the difference as caused by the relative humidity and this sentiment is often expressed by the statement “It’s not the heat, it’s the humidity”. But actually, the humidity is not the best measure to use to measure the level of discomfort. A better measure is the lesser-known ‘dew point’. The National Weather Service explains what ‘dew point’ is and why this is the case.

The dew point is the temperature the air needs to be cooled to (at constant pressure) in order to achieve a relative humidity (RH) of 100%. At this point the air cannot hold anymore water in the gas form. If the air were to be cooled even more, water vapor would have to come out of the atmosphere in the liquid form, usually as fog or precipitation.

General comfort levels that can be expected during the summer months:

For those who like to get their information in emoji form, here’s one. 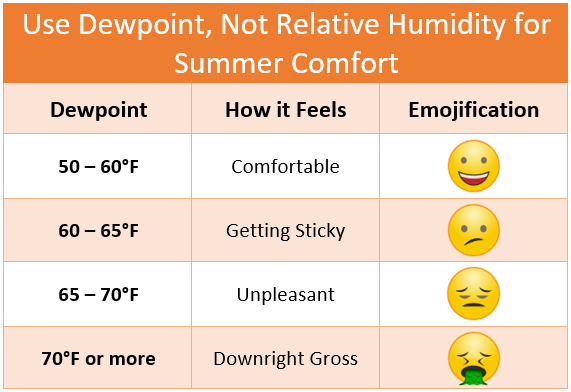 I noticed this myself about ten days ago when it was hot. I was outside and noticed that it felt very muggy. When I checked, the temperature was 91F but the relative humidity was only 42%, which would normally be felt as comfortable. But the dew point was 65F.

Of course the three things (actual temperature T, the dew point temperature TD, and the relative humidity RH) are related. Given any two, you can calculate the third. This website enables you to obtain any one of them given the other two and provides the actual formulas used, where temperatures used in the formulas are measured in Celsius.