We know that the Trump administration, so quick to callously separate children from their parents at the border, is dragging its feet on reuniting the children with their parents now that the policy has been suspended. Some observers are charging that the process of reuniting families is more poorly organized than reuniting families separated by the war in Syria. On June 27, a federal judge, fed up with the foot-dragging, ordered the government to reunite all families within 30 days (i.e., by July 27) and children under five years must be reunited within 14 days (i.e., by July 11).

It is clear that the government never had any plan to reunite children with their parents which is why the process is now so slow and chaotic. But why was there no plan for such an obvious eventuality? Kathryn Joyce says that there are some alarming signs that the administration plans, or at least had plans, to put some of these children up for international adoption, and that this was far from the first time that the US had engaged in this practice. Further alarming is that currently there is a shortage of children available for international adoption due to countries restricting the practice.

WHEN NEWS REPORTS first began to emerge that 81 of the migrant children recently separated from their parents had been sent into the care of one of the largest adoption agencies in the country, the response was swift alarm. Was the government planning on creating “social orphans” out of the children, then offering them up for adoption?
…

To adoption reform advocates, who monitor unethical and abusive practices in child welfare, it looked like any number of adoption crises in the past, like the airlifts out of Haiti in the wake of its cataclysmic 2010 earthquake. Then, masses of unaccompanied children were suddenly labeled orphans and became the focus of a deafening campaign in the U.S. to rescue them through inter-country adoption, even as Haitian adults were being warned not to try to come themselves.
…

As the family separation crisis unfolded on the border, adoption reform advocates noticed that the agency facilitating the foster care of some immigrant children in Michigan, Bethany Christian Services, announced a waiver of its $550 international adoption application fee for the month of June in a since-deleted Facebook post. The dissonance struck the anxious reformers as absurd on its face.
…

Bethany, which is caring for some of the separated children under a grant with the Office of Refugee Resettlement to offer transitional foster care for unaccompanied minors, has repeatedly said that they oppose the family separation policy and are involved because they believe that the children will suffer less in a family setting than in an institution. In a statement on its website, Bethany argued, “Nobody benefits from creating more orphans.” But reform advocates familiar with numerous allegations regarding Bethany’s domestic adoption program, relating to coercive and misleading practices with birth parents – some of which I wrote about in my 2013 book, “The Child Catchers: Rescue, Trafficking and the New Gospel of Adoption” – worried that the agency was finding in the separated children a new adoption supply.

It is interesting how Christian organizations have few scruples about engaging in such practices.

You may wonder how it could be at all possible that children who have been forcibly separated from their parents can be put up for adoption.

[T]he 1997 Adoption and Safe Families Act … was intended to keep children from languishing in foster care for years. The law provides that if a child has been in foster care for 15 out of 22 consecutive months, except in cases of relative foster care, child welfare agencies must stop working toward the goal of reunifying the child with their parents and instead, move to terminate parental rights and make the child available for adoption.
…

[Legal analyst Danny Cevallos] added that, in cases in which foster parents develop an attachment to the child they’re caring for and seek to adopt, they often have a leg up on parents who have been separated from their children. Whereas foster parents are in the area and have access to the court system, he said, separated parents “may not even know anything about the process. And by the time they find out, it’s possible that parental rights have already been terminated by a court.” If court battles do ensue, he continued, the attachment that may have developed between foster parents and their wards could be taken into account by judges who are tasked with making decisions in the “best interest” of a child.

One of the cases that triggered the above court decision by the judge to reunite families was a case of a Brazilian mother who’d been threatened with adoption of her children if she didn’t behave.

While the policy of forcibly separating children has sparked outrage and protests, supporters of the policy have resorted to the old standby, telling them they must be civil, an attitude parodied by The Onion (“Make sure any protests are peaceful, silent, and completely out of sight of anyone who could actually affect government policy” and “Realize that every pressing social issue is solved through civil discourse if you ignore virtually all of human history” and “Consider that we all have different perspectives stemming from things like age, ethnicity, or level of racism”) and this cartoon from Matt Bors. 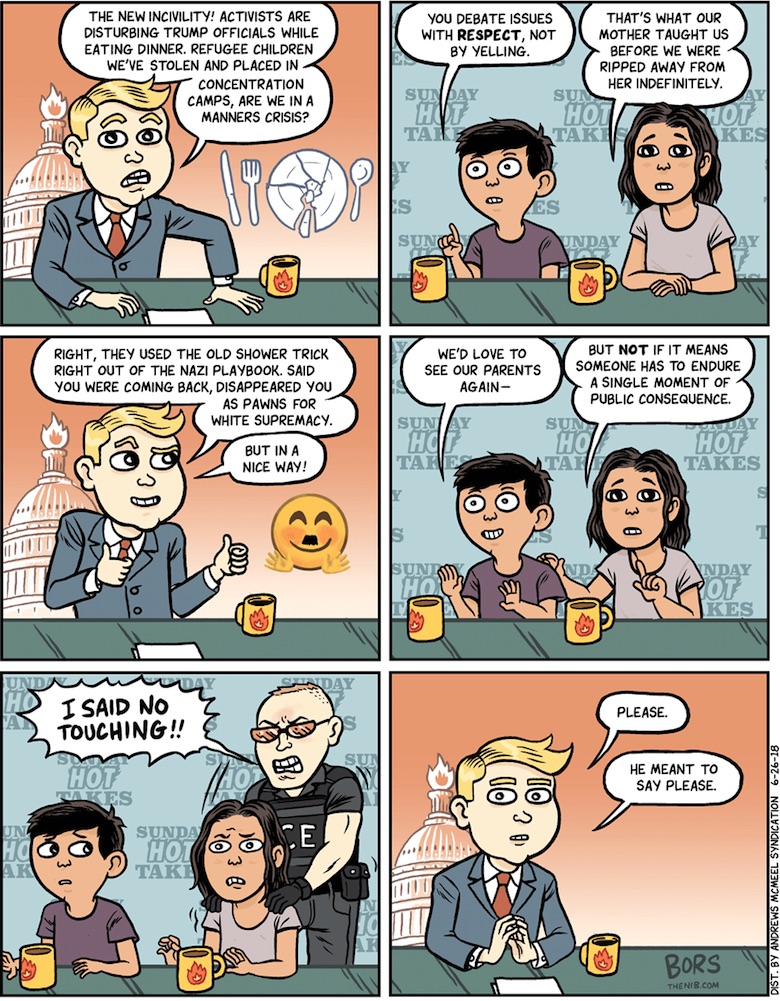