Last week I gave a talk to the Northeast Ohio chapter of the Center for Inquiry on the topic “The Strange Behavior of Rulers and Clocks” where I discussed some of the implications of Einstein’s theories of special and general relativity for our notions of distance and time. After the talk, one of the participants whom I know teaches science told me that he had been unaware of one aspect of my talk and I realized that this may be generally true and so here’s a post about it.

Many people are aware of the phenomena of length contraction (which can be roughly and slightly misleadingly stated as moving objects appear to be shorter than their lengths when at rest) and time dilation (that similarly can be roughly and slightly misleadingly stated as clocks in motion appear to run more slowly than clocks at rest). This post will not deal with making those ideas more precise but instead will deal purely with the lesser-known issue of gravitational red shift and what it means.

To understand it, we should first be aware that all atoms emit light with a characteristic set of frequencies that, using diffraction gratings, can be seen as sharp lines. Exactly these same frequencies are absorbed by these atoms when you shine white light on them. The top line of this figure below shows an absorption spectrum for some atom where the pattern of dark lines tells us what frequencies are being absorbed and thus enables us to identify the atom or atoms doing the absorbing. 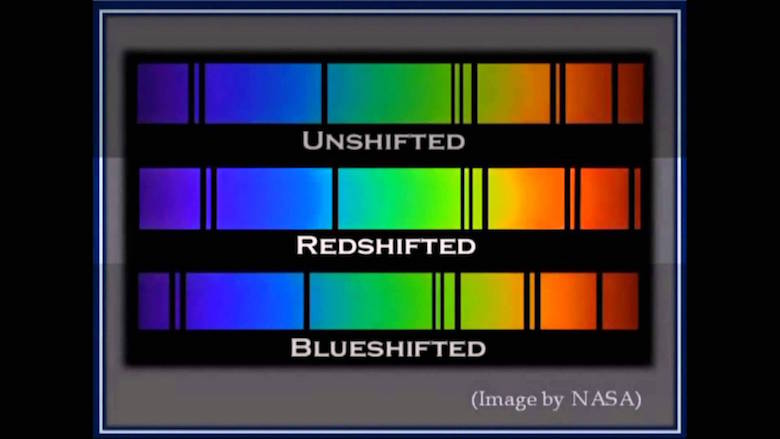 In stars (like our Sun) where the energy production mechanism produces a continuous range of light frequencies that we see as white light, the atoms near the surface the Sun absorb light at their characteristic frequencies and so the light spectrum that we receive will have gaps at those frequencies. This is how we identify what stars are made of. But what is significant is that while the pattern of absorption lines remains the same as what we see in laboratory analyses on Earth, the actual values of the frequencies are shifted towards lower values as seen in the second line. We say that the light has been ‘red shifted’ because red light has a lower frequency than blue light. (Alternatively we can say that the wavelengths are shifted to longer values.)

How can we explain this strange fact? Think of the frequency of the light as the number of wave peaks passing a point per second. What this experimental observation says is that an atom on the surface of the Sun that is (as a numerically simple hypothetical but unrealistic example) emitting four peaks per second will be seen by an observer on the Earth to arrive with a lower frequency, say two peaks per second. (These numbers are purely for illustrative purposes. In reality, the differences are extremely tiny which is why we do not notice these things in everyday life.) How can that be, since the speed of the light does not change? (The constancy of the speed of light is one of the major tenets of relativity.)

This idea that the rate at which clocks run depends on the strength of the gravitational field has been pretty well tested. In fact, it is used in the GPS navigation system. The satellites of the system are at a height of about 22,000 km above the surface of the Earth and thus run at a faster rate than the clocks on the surface of the Earth, since the gravitational field up there is less than the field down here. The corrections due to this have to be built into the system because although the differences are tiny, over time the differences can accumulate and lead to significant errors.

This is one of the fascinating consequences of the theories of relativity, that our everyday notions of distance and time need to be modified.