Following the initial Big Bang, the universe was at incredibly high temperatures but then underwent a period of rapid expansion and cooling and largely became a cold gas of hydrogen. The universe could be considered to be dark at this time since there was no source of light. But at some point, matter started to clump together under the force of gravity and form embryonic stars and the hydrogen atoms started to fuse into helium, releasing energy, some of it in the form of visible light. This moment is referred to as the ‘cosmic dawn’ of the universe.

The interesting question is when this started to happen and searches have been underway to find the faint signals emitted by these early stars. The latest issue of the journal Nature has a paper by a research team that says that they have detected signals from stars that were created 180 million years after the Big Bang. This article explains what the researchers found and the hard work over ten years that was involved in teasing out a tiny signal from the vast ocean of noise. They did not directly detect the light from those stars. Instead they looked at what traces that light would have left on the Cosmic Microwave Background radiation.

During the next 100m years – a period known as the dark ages – gravity pulled slightly denser regions of gas into clumps and eventually some collapsed inwards to form the first stars, which were massive, blue and short-lived. As these stars lit up the surrounding gas, the hydrogen atoms were excited, causing them to start absorbing radiation from the Cosmic Microwave Background at a characteristic wavelength.

This led scientists to predict that the cosmic dawn must have left an imprint in the Cosmic Microwave Background radiation in the form of a dip in brightness at a specific point in the spectrum that ought, in theory, to still be perceptible today.

In practice, detecting this signal has proved hugely challenging, however, and has eluded astronomers for more than a decade. The dip is swamped by other, more local, sources of radio waves. And the expansion of the universe means the signal is “red-shifted” away from its original characteristic wavelength by an amount that depends on precisely when the first stars switched on. So scientists were also not sure exactly where in the spectrum they should be looking – and some predicted the task would prove impossible.

“The team have to pick up radio waves and then search for a signal that’s around 0.01% of the contaminating radio noise coming from our own galaxy,” said Andrew Pontzen, a cosmologist at University College London. “It’s needle-in-a-haystack territory.”

Here is the resulting current picture of the history of the universe. 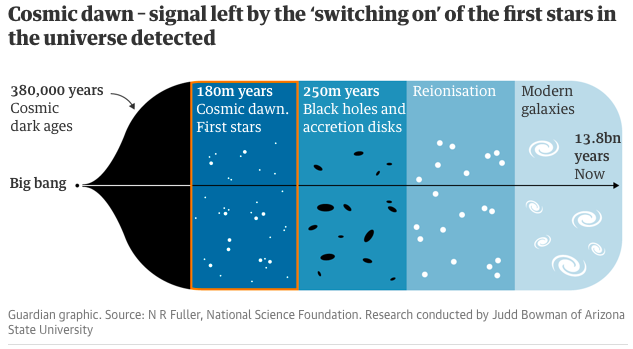 This video from the National Science Foundation explains pretty clearly what was done.

Here’s the abstract of the paper that appeared in Nature.

After stars formed in the early Universe, their ultraviolet light is expected, eventually, to have penetrated the primordial hydrogen gas and altered the excitation state of its 21-centimetre hyperfine line. This alteration would cause the gas to absorb photons from the cosmic microwave background, producing a spectral distortion that should be observable today at radio frequencies of less than 200 megahertz. Here we report the detection of a flattened absorption profile in the sky-averaged radio spectrum, which is centred at a frequency of 78 megahertz and has a best-fitting full width at half-maximum of 19 megahertz and an amplitude of 0.5 kelvin. The profile is largely consistent with expectations for the 21-centimetre signal induced by early stars; however, the best-fitting amplitude of the profile is more than a factor of two greater than the largest predictions. This discrepancy suggests that either the primordial gas was much colder than expected or the background radiation temperature was hotter than expected. Astrophysical phenomena (such as radiation from stars and stellar remnants) are unlikely to account for this discrepancy; of the proposed extensions to the standard model of cosmology and particle physics, only cooling of the gas as a result of interactions between dark matter and baryons seems to explain the observed amplitude. The low frequency edge of the observed profile indicates that stars existed and had produced a background of Lyman-α photons by 180 million years after the Big Bang. The high-frequency edge indicates that the gas was heated to above the radiation temperature less than100 million years later.

Note that as in all research at the frontiers, there remain anomalies that need to be further investigated, in this case the unexpected size of the amplitude of the signal. It is the nature of science to throw up new problems even as it solves old ones.