Wacky former Republican congresswoman Michele Bachmann had announced that she was thinking of running for the Minnesota senate seat vacated by Al Franken and that she was going to ask her god what he thought about the idea. There was a time when I would have welcomed the entry of a loony right-winger into an election because they would not win but would provide plenty of entertainment. But after Donald Trump won, that has ceased to be a risk-free option..

So what did her god tell her? According to her, did his is passive-aggressive inscrutability thing and stayed silent and she took that as a ‘No’.

Over the weekend, Bachmannn told End Times radio host Jan Markell that after much prayer, she has decided that God does not, in fact, want her to make a bid for this seat.

“I’m not going to run for that office,” she said. “I had a lot of people contacting me, wanting to give me money and be a part of my team to run for a campaign … But what I did is I did what I have done on every other time I thought about running: I took it to the Lord in a very quiet way, I took it before the Lord, I prayed, I tried to have my ears open and hear what God was saying to me.”

“I considered it for quite a long time,” Bachmann continued. “From the very first day when Al Franken had announced his resignation from the U.S. Senate, I went before the Lord and it became very clear to me that I wasn’t hearing any call from God to do this.”

“I’ve always prayed and tried to seek out what God’s will for me would be,” she added, “and each time before, I’ve had this inner sense that I’m supposed to do this, I’m supposed to run. It doesn’t mean a guarantee that I’ll win, all it means is that that’s what I sensed in my spirit, that God wanted me to run. I had absolutely no sense from the Lord at all that I was supposed to run this time.”

“I just had no sense from the Lord that this is something that I should do right now,” Bachmann said, “so I’m not going to do it.”

But her god did speak to her very clearly in the form of a message in the sky. Well, almost, since it was on a billboard. 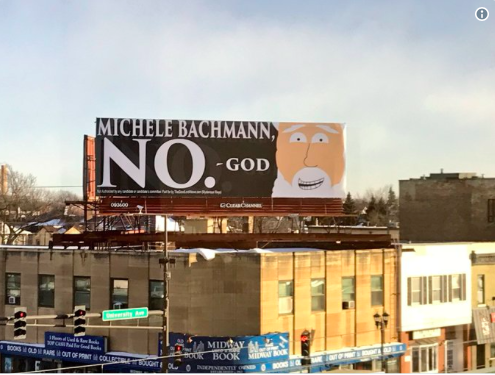 Geez, Michele, how much clearer can your god be?

Selective, self-interested outrage over civil rights abuses » « The controversy over Thomas Kuhn’s ideas about the nature of science