Rat from the comic strip Pearls Before Swine can be forgiven for thinking that there is something supernatural going on. Everyone has experienced this. You carefully put away items that have long strings and cords and the next time you take them out, even after a brief interval, the cords are all entangled with each other and knotted. It seems almost like they have lives of their own, going wandering as soon as they are out of your sight. The blog Seriously, Science? points to a paper by two physicists that looked into this annoying and perplexing issue.

Here’s some text from the abstract of the paper.

It is well known that a jostled string tends to become knotted; yet the factors governing the “spontaneous” formation of various knots are unclear. We performed experiments in which a string was tumbled inside a box and found that complex knots often form within seconds. [My italics-MS] We used mathematical knot theory to analyze the knots. Above a critical string length, the probability P of knotting at first increased sharply with length but then saturated below 100% … The relative probability of forming a knot decreased exponentially with minimum crossing number and Mobius energy, mathematical measures of knot complexity. Based on the observation that long, stiff strings tend to form a coiled structure when confined, we propose a simple model to describe the knot formation based on random “braid moves” of the string end. Our model can qualitatively account for the observed distribution of knots and dependence on agitation time and string length.

This figure and its caption from the paper gives the basic idea. 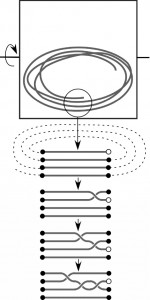 [Caption: Schematic illustration of the simplified model for knot formation. Because of its stiffness, the string tends to coil in the box, as seen in Fig. 1, causing a number of parallel string segments to lie parallel adjacent the end segment. As discussed in the text, we model knots as forming due to a random series of braid moves of the end segment among the adjacent segments (diagrams at bottom). The overall connectivity of the segments is indicated by the dashed line.]

That’s science, baby! Answering the important questions that puzzle everyone.