Sri Lanka is a Buddhist majority country and like the members of majority religion in any country, Buddhists there tend to be very touchy about any perceived insults to their religion, however trivial, and are willing to punish people for acts they deem to be disrespectful. So I was not surprised when they arrested, detained for four days, and then deported, a British tourist because she had a Buddha tattoo on her arm. Some years ago, another tourist was refused a visa upon arrival when the immigration officials noticed that he too had a Buddha tattoo. The irony is that both people are practicing Buddhists who got the tattoos as symbols of their devotion.

But what surprised me was that the Supreme Court in Sri Lanka had taken up the case and ruled in favor of the woman, awarding her compensation of about $5,000 and using quite strong language in its opinion, saying that her treatment was “scandalous and horrifying”. I would not be att all surprised to hear that the militant Buddhist groups in Sri Lanka are planning to organize protests in front of the judges’ homes and offices. They are like fundamentalist religionists everywhere, easily offended and quick to use state power when they can to preserve privileges for just their religion.

And while we are on the topic of religious intolerance in the sub-continent, Hindu extremists are on the warpath in India about a film that is not yet released but which social media has said will show a romance between a Hindu woman and a Muslim.

Riot police may be deployed at Indian cinemas over the release of a film about a mythological Indian queen that has sparked protests, attacks on the set and director, and threats to mutilate the lead actor.
…

Rightwing Hindu organisations believe the film will depict a romantic relationship between Padmavati and an invading king, Alauddin Khilji, who is Muslim.

Though Khilji existed, experts say there is little historical evidence for Padmavati, who may have been created by the Sufi Muslim author of the poem, Malik Muhammad Jayasi.

But the queen has become an important mythological figure especially revered by members of the Hindu Rajput caste, to which the character in the poem belonged.
…

Rajput groups and royals belonging to the traditional warrior caste have also complained about Padukone dancing and baring her midriff in the film’s trailer.

Rana Safvi, a historian, blamed the controversy on growing religious polarisation in India. “Our tolerance levels have gone for a toss,” she said.

Rumours were also spreading on social media more quickly than they could be debunked. “No one reads much any more and we believe all kinds of unverified stuff on WhatsApp,” she said. 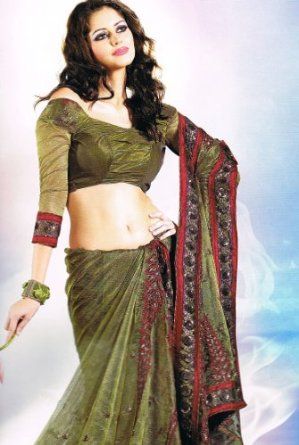 They are upset that she bares her midriff? The sari that is worn by so many women in that region often bares the midriff (though the part that is draped over shoulder sometimes obscures it when seen from the front) and is considered perfectly normal. But no one can ever accuse religious extremists about being logical or consistent.