Brent Larkin used to be the director of the editorial page of the Cleveland Plain Dealer before he retired and now has a weekly column that appears on Sundays. He is someone whom I consider to be a conservative and during his tenure the editorials tended to favor conservative causes and endorse conservative candidates. In last Sunday’s column, he reflected on what he had learned on a recent overseas trip about how other countries view the US and Donald Trump, and that they, unlike his supporters in the US, see him as the “mean, small man he really is”.

People I spoke with from England, Germany, India, Zimbabwe and elsewhere all used the same nouns. He’s a ”child,” a ”fool,” a ”clown,” a ”menace,” and descriptions that can’t be repeated in a daily newspaper.

Truth is, he’s much worse. He’s cunning, ruthless and has a long history of willingness to ruin the lives of others in pursuit of wealth.

But what Trump isn’t is intelligent. At times, he actually comes off as stupid. And that his supporters can’t quite grasp that bodes poorly for our future — not to mention the health and stability of the entire planet.
…

Trump clearly thinks so. His budget would cut more than $2 billion annually in spending on global health programs. That budget, as described in a Foreign Policy magazine article after Trump’s ”skinny” budget was released but before his final budget proposal in May, would result in ”the end of foreign aid as we know it.”

Anyone who thinks Trump’s supporters will be the least bit bothered by the inhumanity of these budget proposals hasn’t been paying attention. After all, a base that stands by their man, even as he tries to strip them of health care and pass a tax cut bill that tosses them a measly few crumbs, surely won’t mind a bit if we starve to death some more dark skinned children 8,000 miles away.

Republicans who run Congress may by a bit more bothered by Trump’s savagery. History will not be kind to these people for turning a blind eye while Trump strips the presidency of all sense of dignity with his amoral behavior and actions that could be construed as criminal obstruction of justice.

I have never seen Larkin express views so strongly. But he and cartoonist Wiley below are right. We do have a malevolent clown as president. 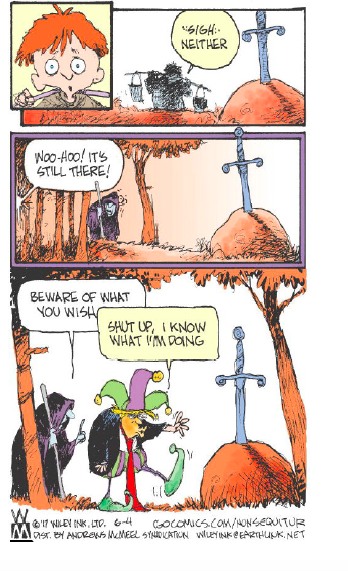