You may have seen this photograph in the media showing a 16-year old Girl Scout Lucie Myslikova in her uniform calmly facing down a skinhead during a neo-Nazi rally held in the Czech Republic. 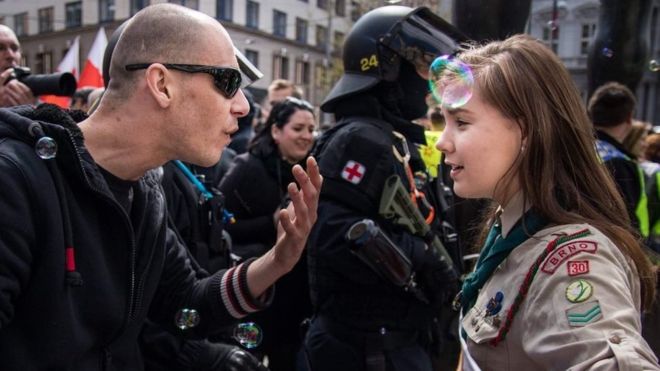 She explained why she did what she did.

“I wasn’t afraid,” Lucie told the BBC by telephone from her school.

“I went to the counter-demonstration as someone who was determined to change things. To me it makes sense to try and change the world around me,” she went on.

“I think young people should get involved in such things. They should be aware of what’s going on.

“You ask me if standing up to skinheads should be left to older people – well us, younger people, are going to be living here a lot longer than the older generation.”

Lucie explained the argument with the unnamed man had been over refugees and migrants. She said she had told him that countries had a duty to help those fleeing war and conflict, and that in such cases borders did not exist.

He told her she would be raped by the very people she was trying to save.

“The main thing that’s struck me is that some people are now calling me an ‘extremist’, that being anti-fascist is somehow ‘extremist’,” she told the BBC.

“That seems to be me the height of absurdity.”

That photo has become iconic, like other images of young women staring down thugs and security forces as you can see in the above link. Below is one taken of a woman smiling mockingly at an angry man in England and the woman in the one below that is confronting the highly militarized police force in the US during a Black Lives Matter protest, both clearly unintimidated. 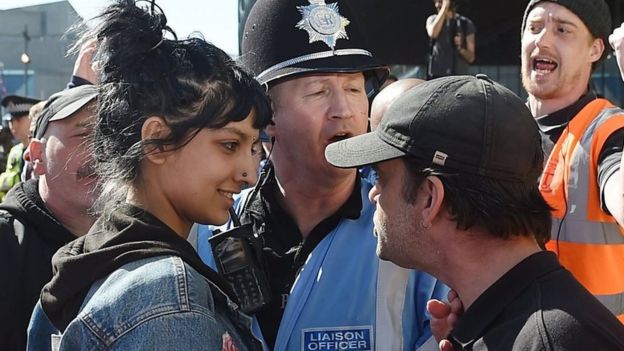 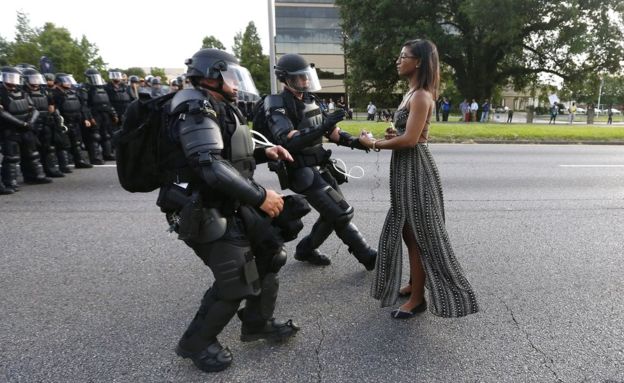 I was interested in the fact that, as far as I am aware, the Girl Scout had not received any pushback by the Girl Scouts organization for wearing the uniform at a protest against neo-Nazis. But there is the issue of what would happen is a Girl Scout were to appear in uniform in support of a neo-Nazi or other racist group.