UPDATE: Here are some signs from the marches around the world. This sign describes me and a lot of the people for whom this may be one of the few or only rally they ever attended. 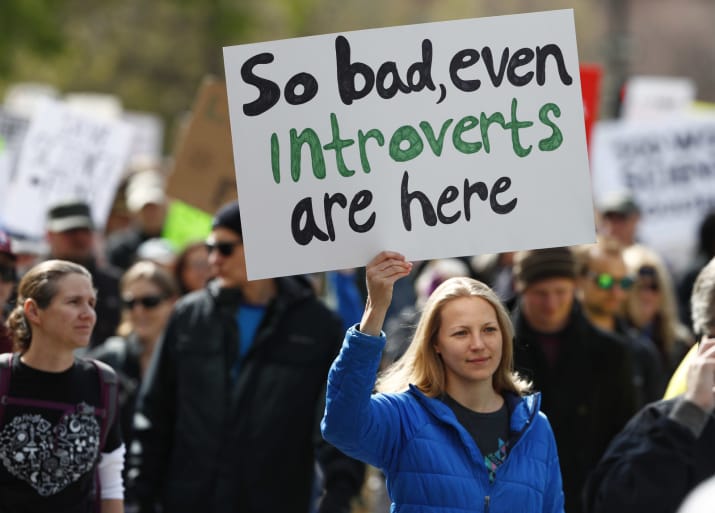 I just returned from the Cleveland March for Science. I spent my time at the pre-march events in Public Square and waited for the talks but came home when the march proper started. I have little experience with marches and rallies so have no means of comparison and estimating numbers. All I can say is that it exceeded my own expectations. It took quite a long time once the rally ended for the crowd to leave the square on the march, which is a sign of how big the crowd was.

The crowd was large and diverse in most categories except, sadly, in terms of color. While there were men and women and young and old, there were very few people of color. The crowd was lively, even though the sun was not out and the temperature was only about 45F. Fortunately it did not rain nor was there a wind so it was fine. The crowd was large enough that it was hard to get close to the speakers and hear clearly what they were saying, except for those veteran rally speakers who were shouting into the microphone. But what most people were doing was wandering through the crowd, mingling, looking at each other’s signs and buttons, and signing up for various things. One sign that stuck out for me was a variation on a popular chant:

What do we want?
Science-based policies!
When do we want it?
After peer review!

While the event organizers said in their remarks that this was a march for science and was not meant to be partisan, there were plenty of anti-Trump signs and slogans.

The Guardian had a roundup of marches across the US and the world .

The main March for Science event was held in Washington DC, where organizers made plans for up to 150,000 people to flock to the national mall. Marchers held a range of signs, some of them attacking Donald Trump, depicting the president as an ostrich with his head in the sand or bearing the words “What do Trump and atoms have in common? They make up everything.”
…

“I’m encouraged by the marches I’ve seen already taking place around the world,” said Rush Holt, a former congressman and head of the American Association for the Advancement of Science. “For generations scientists have been reluctant to be in the public square. There is a lot of concern.”

The Trump administration’s attitude towards science ranges from neglect to outright hostility.

The White House’s recent budget proposal removes around $7bn in science funding, with the National Institutes of Health, which funds medical research across the US, bearing much of the pain. Earth sciences, ranging from weather satellites to marine research to coastal preservation, were also lined up for severe cuts.

Climate change is at the heart of the March for Science, spurred on by the dismissal of the issue by Trump and his top advisers: budget director Mick Mulvaney has said climate research is a “waste of your money” and Scott Pruitt, the administrator of the Environmental Protection Agency, has erroneously denied that carbon dioxide is a primary driver of global warming.

Other areas of science have been left all but abandoned by Trump. The president has yet to nominate administrators for Nasa and the National Oceanic and Atmospheric Administration, nor to appoint his own science adviser.

Sharon Lerner looked at the bigger national picture and interviewed many scientists about why scientists are coming out in such large numbers. The response is pretty consistent. It is because they feel that science and scientists are under serious attack.

“We’re starting to realize how seriously our oceans are in trouble,” said David Guggenheim, a marine biologist who studies coral reefs. Since 1970, the Caribbean has lost about 50 percent of its reefs.

For the past 17 years, Guggenheim has been working in Cuba, which has some of the healthiest coral reefs left in the Caribbean. The Cuban reefs have thrived because the country has protected its coastal waters — and also hasn’t suffered the effects of large-scale tourism or agriculture. Also, said Guggenheim, “they actually listen to their scientists. There’s no climate debate there like we have here.”

Protecting fish is essential for protecting reefs, said Guggenheim. “We think of fish as something to eat, as crops that grow in the ocean. But they have jobs to do and one of them is keeping coral reefs healthy.”

Guggenheim is marching because he’s alarmed by the anti-science bent of the new administration. “I’m used to getting around the table with the opposition. I’m used to compromising. But this is different,” said Guggenheim. “It’s a throw-back to the dark ages. The problem is the voice of science is not being heard. The voice of Trump is being heard.”

Yes, Cuba, the country that US governments love to hate, listens to its scientists and protects its natural resources, when given the state of its economy because of the US embargo against it, it would have every justification for exploiting all its resources fully to meet its economic needs.

Next week is supposed to be the Peoples Climate March. I am not sure why these two marches were not combined.