Mississippi usually ranks low in terms of public health measures while California ranks high. But when it comes to childhood vaccinations, that was reversed with resistance to childhood vaccination being high in California while vaccination rates have been highest in Mississippi. 99.7% of Mississippi kindergartners have had their shots, compared to a national average of 94.5% and the anti-vaxxers had taken aim at that state. The reason for the high rates is simple. Mississippi was enlightened enough to take a strong line over a long time when it comes to confronting the spread of infectious diseases, while California had a large number of well-to-do, educated people who bought into the anti-vaccinations scare stories and had the clout to exempt their children. The state had allowed parents to opt out under the most generous terms, such as having religious or philosophical objections

Now California has seen the light and passed a law in 2015 that made it much tougher to gain exemptions. You now must have a medical reason certified by a doctor.

The California vaccine law passed in 2015 was one of the most far-reaching inoculation laws in the nation. It bars parents from using religious or personal beliefs as a reason to excuse their children from enrolling in kindergarten without receiving all state-required immunizations. California joined just two other states — Mississippi and West Virginia — in making such a requirement as a condition for school enrollment.

The law drew hundreds of protesters to the state Capitol, where they argued that parents should have the right to make decisions about their children’s health without interfering with their ability to attend a public or private school.

But most lawmakers and Gov. Jerry Brown said the public health was too important to allow unvaccinated children who don’t have an allergy or other medical excuse to go to school. 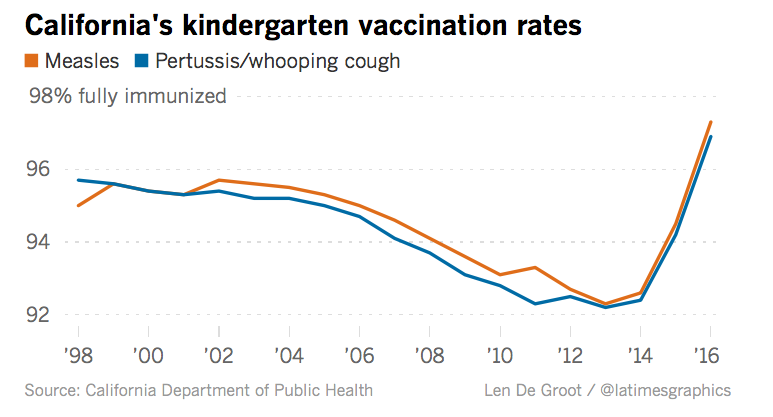 New data released Wednesday showed that the percentage of California’s kindergartners as of last fall with all required vaccinations rose from 92.8% to 95.6%. Los Angeles County’s rate jumped from 90% to 95%, and Orange County’s from 92.5% to 95.5%.

More kindergartners were also getting the measles vaccination. An astonishing 97.3% of California’s kindergartners reported receiving both measles shots, up from 94.5% a year ago and 92.6% reported in the fall of 2014, just before the Disneyland measles outbreak struck.