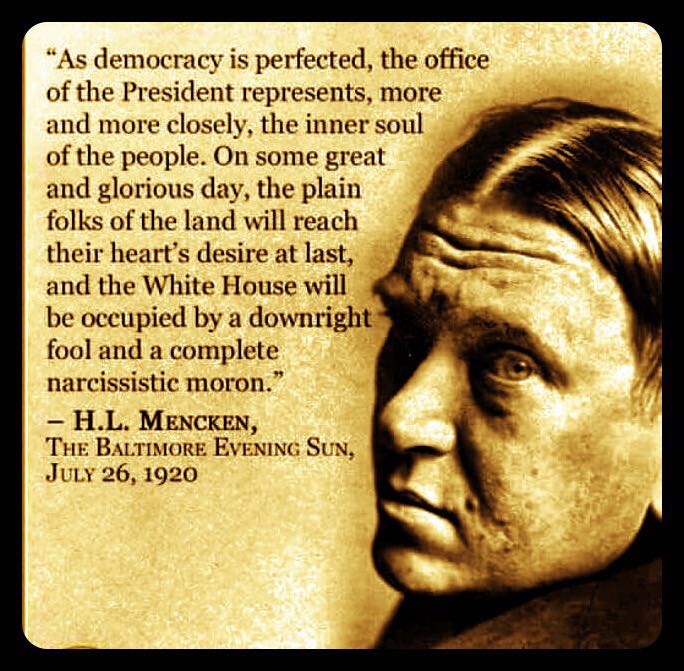 Since it is common for people on the internet to make up fake quotations that are relevant to contemporary events, ascribe them to eminent people to increase their credibility, and then have the meme go viral, I try to check for accuracy before passing them on. According to Snopes, this one is pretty close to what Mencken actually wrote.

H. L. Mencken was an acerbic writer and columnist for the Baltimore Sun. He was a deep skeptic of religion and his daily commentary during the Scopes trial of 1925 make for hilarious reading and have become the stuff of legend. I have quoted him many times before in my book God vs. Darwin and on this blog.

On July 26, 1920 in an article entitled Bayard vs. Lionheart he warned about that when the size of a democracy becomes too large for there to be direct contact between the voters and those seeking office, people who are worthy of the office find it harder to compete against vacuous competitors. The almost verbatim quote in the meme has been highlighted.

The larger the mob, the harder the test. In small areas, before small electorates, a first-rate man occasionally fights his way through, carrying even the mob with him by force of his personality. But when the field is nationwide, and the fight must be waged chiefly at second and third hand, and the force of personality cannot so readily make itself felt, then all the odds are on the man who is, intrinsically, the most devious and mediocre — the man who can most easily adeptly disperse the notion that his mind is a virtual vacuum.

The Presidency tends, year by year, to go to such men. As democracy is perfected, the office represents, more and more closely, the inner soul of the people. We move toward a lofty ideal. On some great and glorious day the plain folks of the land will reach their heart’s desire at last, and the White House will be adorned by a downright moron.

If Mencken is right, democracy consists of an irreversible current towards increased mediocrity in our elected officials, not a cheery thought.