I wrote yesterday about the Australian betters currently touring Sri Lanka finding the spin bowling almost unplayable. But what surprised me was that one of the spin bowlers Lakshan Sandakan was described in articles as a ‘chinaman bowler’.

It is not that I was unfamiliar with the term’s past use in cricket. But at least in the US, the word ‘chinaman’ is seen as pejorative and its use highly frowned upon, except perhaps maybe by Donald Trump supporters, and so I thought it had been retired and was startled to see it again.

To understand the origins of the term, it helps to understand that in cricket, unlike in baseball, bowlers make the ball bounce before it reaches the batter. Bowlers deliver the ball with an overarm action and with a straight arm and it can be fast (above 80 mph), medium pace (in the range 60-80 mph) or slow (less than 60 mph), with each bowler specializing in one range of speeds.

Those who bowl slow depend upon spinning the ball so that after it bounces, it moves from left to right or right to left, and each type of delivery has its own name. So a right arm spin bowler who turns the ball from left to right is called an ‘orthodox’ spinner, as is a left arm spinner who turns the ball from right to left. This is because that kind of spin can be imparted to the ball using just the fingers and is the easiest to do and thus those bowlers are the most common, though of course left-handers are less common than right handers.

Right arm bowlers who spin from right to left have to use their wrists to impart the required spin and this is harder to do with good control, though they can usually get more turn. Thus they are rarer than orthodox spinners. Right arm bowlers who do this are called leg spinners. But a ball delivered by a left arm wrist spinner that turns from left to right was traditionally called a ‘chinaman’ and bowlers who do this are really rare.

The origins of the term, like many of the weird terms in cricket, are lost in the mists of time but this story is as good as any.

In cricketing parlance, the word “chinaman” is used to describe the stock delivery of a left-arm “unorthodox” spin bowler (though some reserve it for the googly delivery). The origin of the term is uncertain. One version relates to a Test match played between England and the West Indies at Old Trafford in 1933. Ellis “Puss” Achong, a player of Chinese origin, was a left-arm orthodox spinner, playing for the West Indies. He had Walter Robins stumped off a surprise delivery that spun into the right-hander from outside the off stump. As he walked back to the pavilion, Robins reportedly said to the umpire, “fancy being done by a bloody Chinaman!”, leading to the popularity of the term in England, and subsequently, in the rest of the world.

I would have thought that by now someone would have come up with a new name for this offensive term but apparently not. I was wondering if this was because the term refers to a type of delivery and not to a person. Or maybe the term is considered offensive mostly in the US, which is not a cricket playing power, but where there has been an ugly history of discrimination against the Chinese who came here as laborers in the 19th century. It is interesting that the term was not originally seen as offensive but became so when used in the context of discrimination. It may be like the way that the label ‘Negro’ has become viewed more negatively with time.

The love affair that cricket has with giving names and labels to everything goes even further. A right arm spin bowler whose stock delivery is a ball that spins from right to left but can disguise the delivery action so that on occasion it actually spins the opposite way, is said to have bowled a ‘googly’. A right arm bowler whose default delivery is from left to right but disguises it to spin the other way is said to have bowled a ‘doosra’. Both are also sometimes called ‘wrong uns’. These disguised deliveries are intended to bamboozle a batter into making a poor shot and getting out,

Cricket has detailed names for other things too. Each type of shot by a batter has a name (drive, pull, cut, glance, hook, and sweep being the most common), sometimes supplemented by adjectives (late cut, cover drive) to more precisely specify how exactly the ball was hit and in what direction it was sent.

Similarly, although there are just eleven fielders, each spot where a fielder might be stationed can be pinpointed quite accurately. The following diagram gives the positions for a right-handed batter. For a left-handed one, the positions are flipped about a vertical line drawn through the center. 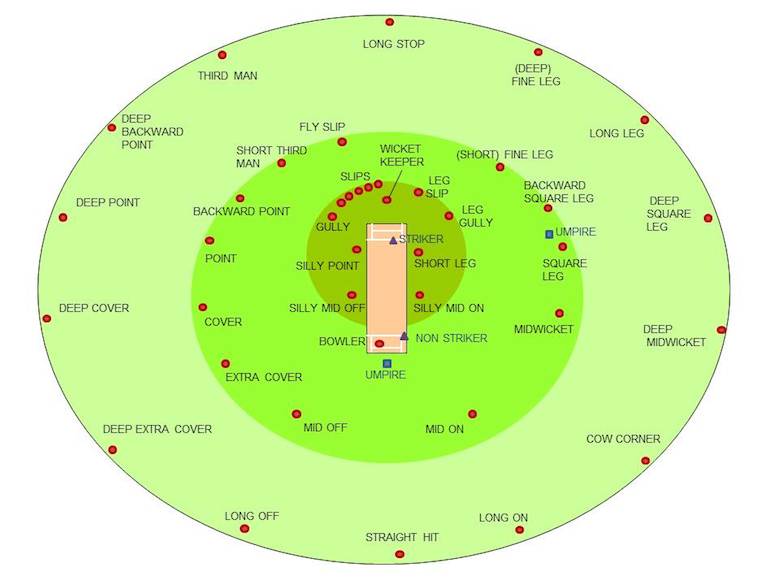 Why this level of minute detail? Perhaps it is due to the fact that for so long, most people could follow the games only on the radio and good commentators could give the listener an effective mental image of the action with just a few words. For example, suppose a right arm slow bowler was bowling to a right-handed batsman. A sentence like “Smith bowled a googly that pitched outside the off stump that Jones pulled straight to deep mid wicket” may sound like gibberish to most people but enables aficionados to visualize exactly what happened almost as if they had been there.

No wonder cricket baffles those who do not grow up with the game and thus acquire this arcane vocabulary by a type of osmosis.

GOP supporters start to hyperventilate » « Quiz on the US constitution