Here are the final Iowa results. 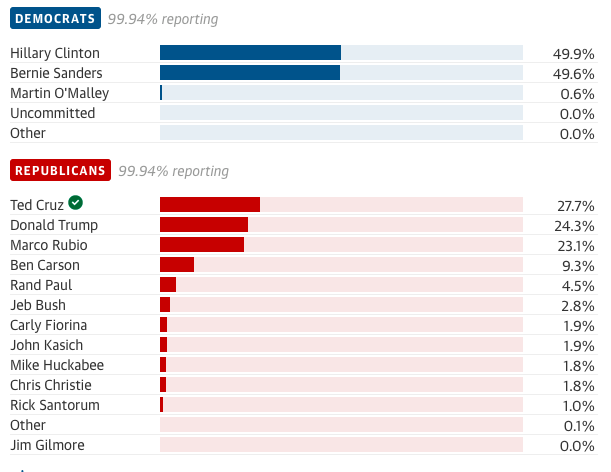 I stayed up until 11:00 am ET last night to see the Iowa caucus results. By that time, the Republican side had been decided with Ted Cruz beating Donald Trump, and Marco Rubio coming in a close third. This was obviously good for Cruz and Rubio and disappointing for Trump but I cannot see it affecting the results much in the next contest in New Hampshire on Tuesday, February 9. That is a primary and thus less volatile than the quirky caucus process and in that race Trump is still way ahead of the entire pack with 33%, Cruz second at 12%, and Rubio in fifth place (after Kasich at Bush) with 10%.

The real nail biter was on the Democratic side with the final result being 49.9% for Hillary Clinton and 49.6% for Bernie Sanders. When I went to sleep, 90% of the precincts had reported and the lead wavered around that narrow margin of 0.3%. It was clear that people were on edge but rationally speaking, the race was over. The result was going to be extremely close either way and the final order did not really matter since this was not an election where even a one vote margin would determine who would get into office and who would go home. This contest was for delegates and at most there would be just a one or two delegate shift out of the thousands that would end up at the Democratic convention. So the final result largely for bragging rights. But clearly for some political observers placing a label of winner and second matters and so the wait for the final result was breathless.

In the end, Clinton got 22 delegates and Sanders got 21. On the Republican side, Cruz got 8 delegates and both Trump and Rubio got 7 each. So basically, it was a two-way tie on the Democratic side and a three-way tie on the Republican side. Sanders can be pleased with this result since he was trailing by 30% back in November. Cruz and Rubio can be pleased since they were only at around 12% in November. It is hard to imagine but in November Ben Carson was the clear leader in Iowa with nearly 30%. Clinton and Trump must both be somewhat disappointed though in Clinton’s case there must a twinge of relief that she managed to avoid an embarrassing loss.

Martin O’Malley got about 0.6% and announced his withdrawal from the race. I felt a pang of sympathy for him. I had noted a long time ago that he would be a good candidate but I think that he waited too long to get into the race. By the time he did so, Sanders had electrified the left wing of the party and its younger cohort who would have been the natural target audience for his message. O’Malley just could not make any inroads. But he is young and in four or even eight years could make a credible candidate.

The evening also saw the exit of Mike Huckabee from the Republican side and I was glad to see him go. While his term as governor of Arkansas saw this former Baptist minister do some reasonable things to help the less wealthy, he had become much more of a religious zealot over time and had revealed a level of duplicitous argumentation that was ugly. He must have been hoping that the heavily religious Republican vote in Iowa would boost his chances. I hope this is the last we see of him.

I expect to see other Republicans like Rick Santorum and Carly Fiorina drop out soon too. But they may stay on hoping to be included in the next debate and for a miracle in New Hampshire. But the day after that primary will see the real winnowing of the field.