As we have seen, Donald Trump’s views on a whole host of issues have changed over time, shifting from more liberal to hardline conservative, especially since he entered the race. The efforts of his rivals to bring this up have been surprisingly lackluster with the ad below being the most pointed but it appeared a little late in the game and may be too late to derail Trump.

What is less well known is that Bernie Sanders’s views have also shifted over time, though not as dramatically. When billionaire Michael Bloomberg announced that he was considering the possibility of a third party candidacy if Trump and Sanders were to end up competing against each other, Nate Silver mapped out the positions of the three of them to see if there was a gap in the political spectrum that would give Bloomberg a viable shot.

He used the statements of the three at various times and plotted them on economic and social axes. Interestingly, it turns out that though Sanders and Trump are polar opposites now, back in 2000 they were pretty close. They then had similar scores along the economic axis but differed moderately on the social axis with Trump being more populist. 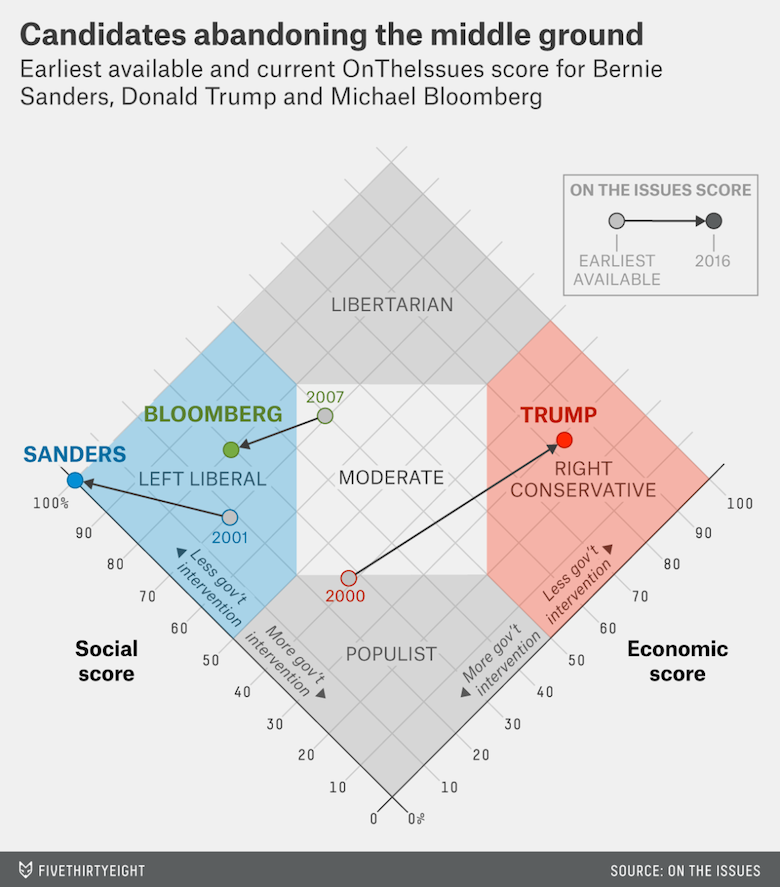 Silver concludes that Trump and Sanders have blocked any lane that might have suited a Bloomberg candidacy with his current views, though if he reverts to his 2007 positions, he has a little more room. Bloomberg used to be a Democrat but changed to Republican to run for mayor of New York and while in office shifted his positions again and now has views close to Barack Obama and Hillary Clinton. So, like Trump, he is used to shifting his positions opportunistically and he has successfully parlayed his liberal stances on social issues with his reactionary pro-oligarchic economic policies within the context of New York city. But Silver thinks that his candidacy is unlikely to go anywhere nationally and I agree.

Here’s a tough question: Who is worse, Trump or Cruz? » « A stinging indictment of Wall Street and the Justice Department